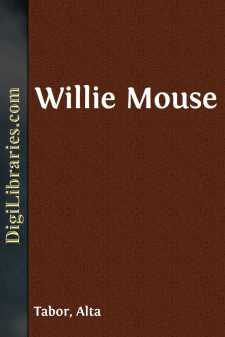 Willie Mouse had often heard his Ma and Pa say that the moon was made of green cheese, and one evening he thought he would see if he could find it.

He packed up a piece of cheese and a crust of bread, and, taking his lantern, set out on his travels.

He had not gone far when he met his friend, Mr. Woodmouse, who asked him where he was going.

“I don't believe it's made of green cheese at all,” said Mr. Woodmouse, but Willie wouldn't listen to him and went on his way.

Coming round by Clover Green whom should he meet but Miss Jenny Wren, looking very gay in her yellow bonnet.

“Where are you off to?” she asked.

“I flew ever so high one evening and I didn't seem to get any nearer.”

“Well,” said Willie, “why should it be made of green cheese if you can't reach it?” And on he went.

Presently he came up to a wood, and looking up he saw Mr. Squirrel jumping from branch to branch.

“You do seem high up. Surely you can tell me the way to the moon. It's made of green cheese, you know.”

“I don't think it's made of green cheese; why shouldn't it be made of nuts?”

“How ignorant everybody is,” said Willie Mouse to himself.

So on he went once more until he came to a little hole in the ground, and being very curious he peeped inside. There sat Mrs. Mole, who came out when she saw him.

“Do you live down there?” asked Willie politely.

“Then I'm afraid you can't tell me how to get to the moon. It's made of green cheese, you know; Ma says so.”

“Nonsense, my child. Don't waste your time looking for the moon; keep your eyes open for worms.”

Willie said “Good-bye” to Mrs. Mole. Then he sat down and opened his parcel because it was getting late and he thought he had better have some dinner.

“I may not reach the moon yet awhile,” he thought, “so I had better save a little piece of cheese for supper.”

After dinner he fell asleep, and on waking he found that it was quite dark. He looked up and there was the moon right high up in the sky.

“Oh, Mr. Moon!” he cried, “You do seem a long way away. I think it would be much easier for you to come down here than for me to get up there.” But Mr. Moon stayed where he was.

Looking up Willie Mouse saw two big eyes gleaming in the dark. They belonged to Mrs. Owl, and as Willie was only a little mouse he didn't know that Mrs. Owl had a special liking for little mice.

Down flew Mrs. Owl. “This is the way to the moon,” she said, and she caught him up in her beak and carried him back to the owl house where she lived.

When Willie Mouse saw all the owlets with their beaks gaping open he began to be frightened, for he feared that Mrs....