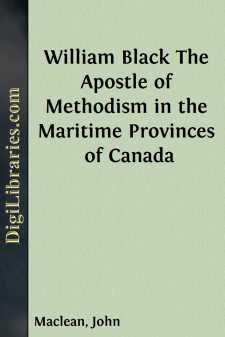 The Birth of a Movement.

HAD Longfellow the poet extended his studies a few years later than the time of the event which formed the subject of Evangeline, he would have come in contact with another race of men, of different breed, language and faith, than that of the Acadians, who were as brave as any of those who sailed away from the valley of the Gaspereaux. For almost coincident with the expulsion of these hardy folk from the fertile fields of the Annapolis Valley, there came visitors from the New England colonies, induced by offers of land, but these were deterred from settlement on account of a fear lest freedom of religious worship should not be accorded them.

Brought up under the influence of the descendants of the Pilgrim Fathers, they prized too highly their religious liberty to barter it for lands or gold, and not until a second proclamation was issued, granting liberty of conscience and worship to all Protestants, did settlers come in large numbers. Five years after the Acadians were expelled emigrants began to arrive in considerable numbers from New England and from Great Britain and Ireland. This was the beginning of a new era, in which the principles of the Protestant Reformation were to be tested, upon soil consecrated by the faith and piety of the Roman Catholic exiles, and an opportunity was found for the expression of the new faith in the moulding of individual character.

While the province was issuing invitations for new settlers and wishing to grant concessions to sturdy and loyal folks, a great awakening was taking place in England, the influence of which was destined to become a strong factor in making a new race on the Western Continent, and to mould in a great measure the social and religious life of the people of Nova Scotia. A revival of spiritual life was in progress under the preaching of Wesley and Whitefield, which was quickening the consciences of the people, imparting high ideals and renovating the social and political life of the nation.

Methodism was doing greater things for the English speaking race than Luther among the Germans, as it infused a spirit of joy and freedom from ritual, with greater liberty of thought and action. It was an era of great names beyond the pale of the national church. The passion for souls became so intense in the hearts of many of the clergy that they gladly espoused the hated name of "Methodist," while others no less zealous stood aloof from the special movement because of its Arminian doctrines.

Whitefield, the prince of orators, stalked through the land proclaiming salvation for sinners, and not content with conquests won in the sea-girt isles, he needs must cross the ocean to tell the story of the ages to wondering thousands. John Berridge, the witty yet zealous vicar of Everton, itinerated through the country and in one year saw not less that four thousand awakened. William Grimshaw, the eccentric curate of Haworth, superintended two Methodist circuits while attending to his own parish, and Vincent Perronet, vicar of Shoreham, who was so trusted a counsellor that Charles Wesley called him the Archbishop of Methodism, gave two sons to the Methodist ministry, and besides being the author of the hymn, "All Hail the power of Jesus Name," Wesley dedicated to him the "Plain Account of the People called Methodists."

The great revival brought into greater prominence Rowland Hill, the eccentric preacher; Augustus Toplady, the author of the Hymn "Rock of Ages;" Howell Harris, the famous Welsh orator, and the Countess of Huntingdon....