Will Weatherhelm The Yarn of an Old Sailor 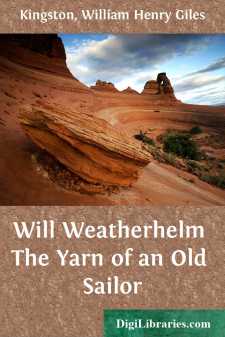 My father, Eric Wetherholm, was a Shetlander. He was born in the Isle of Unst, the most northern of those far-off islands, the Shetlands. He loved his native land, though it might be said to be somewhat backward in point of civilisation; though no trees are to be found in it much larger than gooseberry bushes, or cattle bigger than sheep; though its climate is moist and windy, and its winter days but of a few hours’ duration. But, in spite of these drawbacks, it possesses many points to love, many to remember. Wild and romantic, and, in some places, grand scenery, lofty and rocky precipices, sunny downs and steep hills, deep coves with clear water, in which the sea-trout can be seen swimming in shoals, and, better still, kind, honest, warm hearts, modest women with sweet smiles, and true, honest men.

Once only in my youth was I there. I remember well, on a bright summer’s day, standing on one of the highest of its lofty hills, sprinkled with thousands of beautiful wild-flowers, and as I looked over the hundreds of isles and islets of every variety of form, grouping round the mainland, as the largest island is called, I thought that in all my wanderings I had never seen a greener or more lovely spot floating on a surface of brighter blue; truly I felt proud of the region which my poor father claimed as the place of his birth. I knew very little of his early history. Like the larger proportion of Shetland men, he followed the sea from his boyhood, and made several voyages, on board a whaler, to Baffin’s Bay. Once his ship had been nipped by the ice, whirled helplessly against an iceberg, when he alone with two companions escaped the destruction which overwhelmed her. Finally he returned home, and, sickened of voyages in icy regions, became mate of a merchantman trading out of the port of Hull round the English coast. On one occasion, his brig having received severe damage in a heavy gale, put into Plymouth harbour to obtain repairs. He there met an old shipmate, John Trevelyn, who had given up the sea and settled with his family on shore.

John had a daughter, Jannet Trevelyn, and a sweet, good girl I am very certain she must have been. Before the brig sailed my father obtained her promise to marry him. He shortly returned, when she became his wife, and accompanied him to Shetland. But the damp, cold climate of that northern land was a sore trial to her constitution, accustomed, as she had been, to the soft air of her native Devonshire, and she entreated that he would rather take her with him to sea than leave her there. Fortunately, as he considered it, the owners of the brig he had served in offered him the command of another of their vessels, and he was able to fulfil the wishes of his wife, as well as to please his own inclination, though for her sake he would rather have left her in safety on shore, for he too well knew all the dangers and hardships of the sea to desire to expose her to them.

My father had very few surviving relatives. His mother and sister were the only two of whom I know....