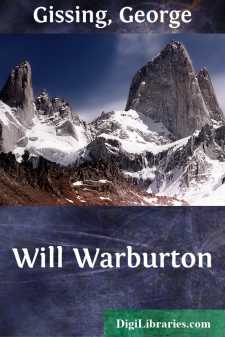 The sea-wind in his hair, his eyes agleam with the fresh memory of Alpine snows, Will Warburton sprang out of the cab, paid the driver a double fare, flung on to his shoulder a heavy bag and ran up, two steps at a stride, to a flat on the fourth floor of the many-tenanted building hard by Chelsea Bridge. His rat-tat-tat brought to the door a thin yellow face, cautious in espial, through the narrow opening.

He threw his bag into the passage, and cordially grasped the woman's hands.

"Dinner ready? Savagely hungry. Give me three minutes, and serve."

For about that length of time there sounded in the bedroom a splashing and a blowing; then Warburton came forth with red cheeks. He seized upon a little pile of letters and packets which lay on his writing-table, broke envelopes, rent wrappers, and read with now an ejaculation of pleasure, now a grunt of disgust, and again a mirthful half roar. Then, dinner—the feeding of a famished man of robust appetite and digestion, a man three or four years on the green side of thirty. It was a speedy business, in not much more than a quarter of an hour there disappeared a noble steak and its appurtenances, a golden-crusted apple tart, a substantial slice of ripe Cheddar, two bottles of creamy Bass.

"Now I can talk!" cried Will to his servant, as he threw himself into a deep chair, and began lighting his pipe. "What's the news? I seem to have been away three months rather than three weeks."

"Mr. Franks called yesterday, sir, late in the afternoon, when I was here cleaning. He was very glad to hear you'd be back to-day, and said he might look in to-night."

"My brother-in-law wishes to see you, sir. He's in trouble again—lost his place at Boxon's a few days ago. I don't exac'ly know how it happened, but he'll explain everything. He's very unfortunate, sir, is Allchin."

"Tell him to come before nine to-morrow morning, if he can."

"Nothing as I can think of just now, sir."

Warburton knew from the woman's way of speaking that she had something still in her mind; but his pipe being well lit, and a pleasant lassitude creeping over him, he merely nodded. Mrs. Hopper cleared the table, and withdrew.

The window looked across the gardens of Chelsea Hospital (old-time Ranelagh) to the westward reach of the river, beyond which lay Battersea Park, with its lawns and foliage. A beam of the July sunset struck suddenly through the room. Warburton was aware of it with half-closed eyes; he wished to stir himself, and look forth, but languor held his limbs, and wreathing tobacco-smoke kept his thoughts among the mountains. He might have quite dozed off had not a sudden noise from within aroused him—the unmistakable crash of falling crockery. It made him laugh, a laugh of humorous expostulation. A minute or two passed, then came a timid tap at his door, and Mrs. Hopper showed her face....