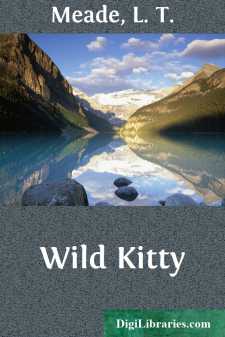 "Yes, mother," replied Bessie Challoner. "You'll be late for school, child, if you are not quick."

"Bessie!" shouted her father at the top of his voice from below stairs."Bessie; late as usual."

"I am really going, father; I am just ready," was the eager reply. Bessie caught up her sailor hat, shoved it carelessly over her mass of thick hair, and searched frantically round her untidy bedroom for the string bag which contained her schoolbooks.

"Oh, Bessie, you'll get into a scrape," said Judy, one of her younger sisters, dancing into the room. "Why, you are late. I hear the schoolbell ringing; it will stop in a moment."

Judy ran into the middle of the room, turned round, and began to laugh ecstatically. "Do you know where it is, you little good-for-nothing? Have you put it hiding?"

"Yes, yes, yes," screamed the child, jumping up and down in her joy.

But Judy had dodged her and was out of the room. Up to the attic flew the child, and after her dashed Bessie. The bag was found in the corner of the linen-cupboard. Bessie aimed a frenzied blow at Judy, who once again dodged her, then the schoolgirl ran downstairs and was out of the house.

"Bessie, for shame!" said her brother, who was standing smoking his cigarette in a very lazy manner in the garden. "Why, you'll never get full marks."

"Don't," said Bessie. "I feel quite hunted between you all."

She had got on the highroad now, and could walk away in peace. She was a tall girl, somewhat bony-looking at present, with a face which showed abundance of intellect, large dreamy eyes, a wide mouth, a flat nose, a long chin. Bessie was certainly not at all a pretty girl; but, notwithstanding this fact, there were few of all the pupils at Middleton School who approached her in popularity. She was clever without being a scrap conceited, and was extremely good-natured, doing her work for the pleasure of doing it and not because she wanted to outstrip a schoolfellow. She was conscientious too, and would have scorned to do a mean or shabby thing; but she was hopelessly untidy, careless to a fault, late for school half her days, getting into countless scrapes and getting out of them as best she could—the butt of her class as well as the favorite, always true to herself and indifferent to the censures or the praise of her fellow-creatures.

"Well, Bess, is that you? Do wait for me," called out a panting voice in the distance.

Late as she was, Bessie stopped. It was never her way to leave a fellow-creature in the lurch.

A girl with dancing eyes and rosy cheeks came panting and puffing round the corner.

"I just caught a sight of the red ribbon with which you tie your hair," she said. "I am so glad you are late; I am too, and I am quite ashamed of myself."

"Why in the world should you be ashamed of yourself, Alice?" askedBessie. "I don't suppose you meant to be late."

"Of course not; but I shall lose my mark for punctuality; and you know, Bessie, I am feverishly anxious to get a move, and to—to win the scholarship at the midsummer break-up."