Why the Chimes Rang: A Play in One Act 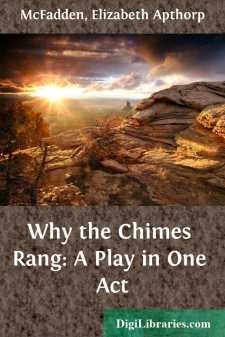 Why the Chimes Rang.

The scene is laid in a peasant's hut on the edge of a forest near a cathedral town. It is a dark low-raftered room lit only by the glowing wood fire in the great fireplace in the wall to the right, and by a faint moonlight that steals in through the little window high in the left wall. This window commands a view of the cathedral and of the road leading down into the town. The only entrance into the hut is the front door near the window.

The furnishings are few: two substantial stools, one near the window, the other before the fire, logs piled up near the hearth, and on the chimney shelf above a few dishes, three little bowls, three spoons and a great iron porridge pot. A wooden peg to the right of the chimney holds Steen's cap and cape, one to the left an old shawl. Near the door Holger's cap and cape hang from a third peg.

Despite its poverty the room is full of beautiful coloring as it lies half hidden in deep shadow save where the light of the fire falls on the brown of the wood and the warmer shades of the children's garments, illuminates their faces and gleams on their bright hair.

When the curtain is raised Steen is sitting disconsolately on the stool near the fire. He is a handsome sturdy little lad of nine or ten, dressed in rough but warm garments of a dark red. Holger a slender boy some four years older, bends over Steen patting him comfortingly on the shoulder.

There is petulance and revolt in the expression of the younger boy but Holger's face is full of a blended character and spirituality that makes him beautiful. He is clad like his brother in comfortable but worn jerkin and hose of a dark leaf green. His manner to the little boy is full of affection, though occasionally he is superior after the manner of big brothers. Throughout the play, two moods alternate in Holger, a certain grave, half-mystical dreaminess and bubbling through it, the high spirits of his natural boyish self.

HOLGER. Take heart, Steen, perhaps we can go next year.

STEEN. Next year! Next year I'll be so old I won't want to go.

HOLGER. Oh, quite old folks go to the Christmas service. Come, let's watch the people going down to town.

HOLGER. The road'll be full, grand folk! (He crosses to the window) Come watch, Steen.

HOLGER. (Looking out) Why the road's all empty again!

HOLGER. (Trying to be brave) They're lighting the cathedral!

STEEN. I won't see! Mother said way last summer that we could go to-night, and now—(His voice breaks in a sob)

HOLGER. She meant it! She didn't know that the grandmother would be ill, and she and father'ud have to go to her. Be fair, Steen!

STEEN. They might let us go alone. "Too little!" Bah!

(The tone, rather than the words, take STEEN quickly to HOLGER'S side.)

HOLGER. (Pointing out the window) Look, by the dead pine yonder, an old woman facing us, kneeling in the snow, see?...