Why I Believe in Scouting for Girls 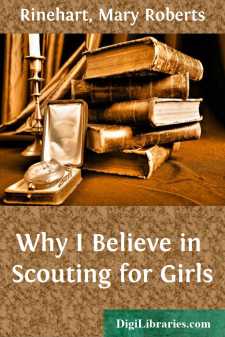 Girls are great idealists. No one familiar with the working of the girl mind can fail to recognize how quickly they respond to ideals. They dream dreams, not of success, but of happiness. They look up rather than out.

But they are vague and uncertain, full of wistful yearnings that lead nowhere. Given a cause and a leader, and they will bring to it an almost pathetic eagerness, staunchness, loyalty, enthusiasm and unselfish effort.

There comes a critical time in a girl's mental and spiritual life, when she is waiting impatiently for young womanhood. The things of her childhood have lost their interest. She has abandoned her dolls. The little boys she played with have deserted her, and found the girl-less associations of the 'teens. They have their clubs, their sports, their meeting places. But to the young girl there is nothing but that period of waiting. She is peculiarly isolated. Her family often finds her strange. She is moody and dreamy. She begins to spend an almost alarming amount of time and thought upon her appearance. The family says: "What in the world is the matter with Jane?" And her father suggests it is too much going to the moving pictures.

But the truth is that Jane is idle. She does not belong, between babyhood and womanhood, anywhere in the social organization. She is active and romantic. Her days are a long waiting for maturity, and with maturity the fulfilment of her dreams, of love, of marriage, of motherhood. She haunts the movies because she finds there vicarious romance and vicarious adventure. The great out-doors is hers to play in—on the screen.

And at the same time, with no increased outlet for her activities, her imagination is being stimulated as never before. Books, magazines, automobiles, moving pictures, all are revealing to her this strange thing we call life, which is hers to observe but not yet to live. She is a yearning onlooker.

It is time to realize that hundreds of thousands of young girls in this country—doubly important now that they are future citizens as well as the potential mothers of future citizens—must be given occupation, a feeling of responsibility, a practical ideal to which they may bring their innate loyalty and enthusiasm. They need organized play and athletics. They need something concrete to tie to. They need to be taught, if you please, what is the "gang" spirit among boys. They need to learn that their young bodies are to be used, instead of decorated. Until they learn that, we shall have sickly mothers and puny babies. No single movement for the improvement of American people as a race, no advance of science or sanitation, can compare in importance with the necessity for building up morally, spiritually and bodily, our future mothers.

Some of our girls need to be taught honesty. They cover their dreams with small deceits. They seek romance out of sheer boredom, and are driven into hypocrisy. The boy has fewer dreams to conceal, and he is honest with the honesty of fresh air and the great out-doors....