Who Was Who: 5000 BC - 1914 Biographical Dictionary of the Famous and Those Who Wanted to Be 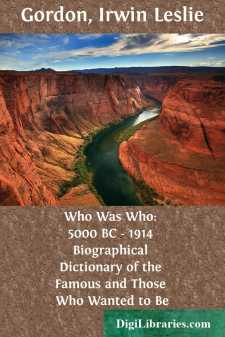 Add to My Favorites
Published: 9 years ago
Downloads: 223
Rating: (0 Votes)

ADAM(1) (last name unknown), ancestor, explorer, gardener, and inaugurator of history. Biographers differ as to his parentage. Born first Saturday of year 1. Little is known of his childhood. Education: Self-educated. Entered the gardening and orchard business when a young man. Was a strong anti-polygamist. Married Eve, a close relative. Children, Cain and Abel (see them). Was prosperous for some years, but eventually fell prey to his wife's fruitful ambitions. Lost favor of the proprietor of the garden, and failed in business. A. started a number of things which have not been perfected. Diet: Fond of apples. Recreation: Chess, agriculture. Address: Eden, General Delivery. Clubs: Member of all exclusive clubs.

(1) Ed. Note: Adam should not be first, but he is given that position out of respect.

ABEL, son of the above. Spent early days in the Garden of Eden with his parents, and later traveled with them. Conducted a sheep raising business. Finally had a row with his brother, and was knocked out in the first round.

ABRAHAM, a patriarch whose descendants now own New York City, Jerusalem, vast sections of the remainder of the globe, and control the pawn-broking, diamond, theatrical, and old clothing markets. Camel and sheep merchant. Considerable land was willed him. A. prospered. Married Sarah (last name unknown). Marital infelicity followed, A. having an affair with Mrs. Abraham's maid. The woman was discharged, and the family lived happily ever afterward. Ambition: The chosen people. Recreation: Riding, tennis, camel racing. Address: Caanan. Clubs: Country.

ACHILLES (first name unknown), a baby whose mother gave him a bath, but forgot to wash all of his feet. Later was veteran of the siege of Troy. Died before receiving pension.

AESOP, novelist, nature faker. Little is known of his childhood except that he was fond of dogs and played with the cat. Later he made animals his life's study. A. discovered the zoological principal that a turtle can run faster than a rabbit, and that foxes never eat sour grapes. Publications: Fables; the book has had a good sale. Address: Greece. Clubs: Zoological Societies.

ALADDIN, of Somewhere. An ancient who possessed a lamp and a genii with which he could secure anything an American millionaire or actress can now purchase.

ALDRICH, Senator N. W., architect of the Aldrich Plan, a system for removing the financial interests of the country from the common people and placing them in the hands of the few.

ALPHONSO XIII, a king who enjoyed Paris without losing his job.

AMUNDSON, Captain Roald, another pole discoverer. Away back in the year 1912 he reached the south pole after a considerable journey through the Arctic regions. Like his predecessors he became an author and lecturer. Publications: The South Pole....