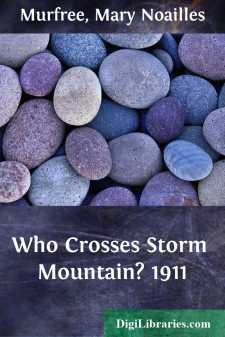 The wind stirred in the weighted pines; the snow lay on the ground. Here and there on its smooth, white expanse footprints betokened the woodland gentry abroad. In the pallid glister of the moon, even amid the sparse, bluish shadows of the leafless trees, one might discriminate the impression of the pronged claw of the wild turkey, the short, swift paces of the mink, the padded, doglike paw of the wolf. A progress of a yet more ravening suggestion was intimated in great hoof-marks leading to the door of a little log cabin all a-crouch in the grim grip of winter and loneliness and poverty on the slope of the mountain, among heavy, outcropping ledges of rock and beetling, overhanging crags. With icy ranges all around as far as the eye could reach, with the vast, instarred, dark sky above, it might seem as if sorrow, the world, the law could hardly take account of so slight a thing, so remote. But smoke was slowly stealing up from its stick-and-clay chimney, and its clapboarded roof sheltered a group with scarcely the heart to mend the fire.

Two women shivered on the broad hearth before the dispirited embers. One had wept so profusely that she had much ado to find a dry spot in her blue-checked apron, thrown over her head, wherewith to mop her tears. The other, much younger, her fair face reddened, her blue eyes swollen, her auburn curling hair all tangled on her shoulders, her voice half-choked with sobs, addressed herself to the narration of their woes, her cold, listless hands clasped about her knees as she sat on an inverted bushel-basket, for there was not a whole chair in the room.

A young hunter standing on the threshold, leaning on his rifle, a brace of wild turkeys hanging over his shoulders, half a dozen rabbits dangling from his belt, stared at her through the dull, red glow of the fading fire in amazed agitation.

"What did he level, Medory—a gun?"

"Wuss'n that!" replied the younger woman. "He leveled the weepon o' the law!"

The man turned to look again at the curious disarray of the room. "The law don't allow him to do sech ez this!" he blurted out in rising anger. "Why, everything hyar is bodaciously broke an' busted! War it the sheriff himself ez levied?"

"'Twar jes' the dep'ty critter, Clem Tweed," explained Medora, "mighty joki-fied, an' he 'peared ter be middlin' drunk, an' though he said su'thin' 'bout exemptions he 'lowed ez we-uns lived at the eend o' the world."

Her mother-in-law suddenly lowered the apron from her face.

"'The jumpin'-off place,' war what Clem Tweed called it!" she interpolated with a fiery eye of indignant reminiscence.

"Shucks, Medory, ye know the dep'ty man war funnin' whenst he said that about the baby an' the cat! Ye know ez Clem admitted he hed Christmas in his bones!" the elder objected.

"Waal, war Clem Tweed funnin' whenst he done sech ez that, in levyin' an execution?" Bruce Gilhooley pointed with his ramrod at the wreck of the furniture.

The two women burst into lugubrious sobs and rocked themselves back and forth in unison. "'Twar Dad!" Medora moaned, in smothered accents.

A pause of bewilderment ensued. Then the young man's face took on an expression of dismay so ominous that Medora's tears were checked in the ghastly fear of disasters yet to come to her father-in-law. Now and again she glanced anxiously over her shoulder at an oblong black aperture in the dusk which betokened the open door of the shed-room. Some one lurked there, evidently cherishing all aloof a grief, an anger, a despair too poignant to share.

"He did! He did!" asseverated a voice from the veiled head, all muffled in the checked apron....