White Shadows in the South Seas 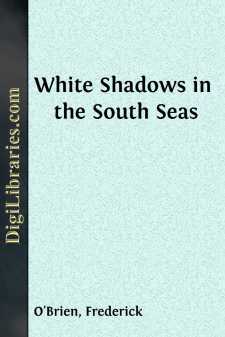 Farewell to Papeite beach; at sea in the Morning Star; Darwin's theory of the continent that sank beneath the waters of the South Seas.

By the white coral wall of Papeite beach the schooner Fetia Taiao (Morning Star) lay ready to put to sea. Beneath the skyward-sweeping green heights of Tahiti the narrow shore was a mass of colored gowns, dark faces, slender waving arms. All Papeite, flower-crowned and weeping, was gathered beside the blue lagoon.

Lamentation and wailing followed the brown sailors as they came over the side and slowly began to cast the moorings that held the Morning Star. Few are the ships that sail many seasons among the Dangerous Islands. They lay their bones on rock or reef or sink in the deep, and the lovers, sons and husbands of the women who weep on the beach return no more to the huts in the cocoanut groves. So, at each sailing on the “long course” the anguish is keen.

“Ia ora na i te Atua! Farewell and God keep you!” the women cried as they stood beside the half-buried cannon that serve to make fast the ships by the coral bank. From the deck of the nearby Hinano came the music of an accordeon and a chorus of familiar words:

“I teie nie mahana Ne tere no oe e Hati Na te Moana!” “Let us sing and make merry, For we journey over the sea!”

It was the Himene Tatou Arearea. Kelly, the wandering I.W.W., self-acclaimed delegate of the mythical Union of Beach-combers and Stowaways, was at the valves of the accordeon, and about him squatted a ring of joyous natives. “Wela ka hao! Hot stuff!” they shouted.

Suddenly Caroline of the Marquesas and Mamoe of Moorea, most beautiful dancers of the quays, flung themselves into the upaupahura, the singing dance of love. Kelly began “Tome! Tome!” a Hawaiian hula. Men unloading cargo on the many schooners dropped their burdens and began to dance. Rude squareheads of the fo'c'sles beat time with pannikins. Clerks in the traders' stores and even Marechel, the barber, were swept from counters and chairs by the sensuous melody, and bareheaded in the white sun they danced beneath the crowded balconies of the Cercle Bougainville, the club by the lagoon. The harbor of Papeite knew ten minutes of unrestrained merriment, tears forgotten, while from the warehouse of the navy to the Poodle Stew café the hula reigned.

Where the belles of Tahiti lived in the shade to whiten their complexions.

Under the gorgeous flamboyant trees that paved their shade with red-gold blossoms a group of white men sang:

“Well, ah fare you well, we can stay no more with you, my love, Down, set down your liquor and the girl from off your knee, For the wind has come to say ‘You must take me while you may, If you'd go to Mother Carey!’ (Walk her down to Mother Carey!) Oh, we're bound for Mother Carey where she feeds her chicks at sea!”

The anchor was up, the lines let go, and suddenly from the sea came a wind with rain.

The girls from the Cocoanut House, a flutter of brilliant scarlet and pink gowns, fled for shelter, tossing blossoms of the sweet tiati Tahiti toward their sailor lovers as they ran....