White Mr. Longfellow, the (from Literary Friends and Acquaintance) 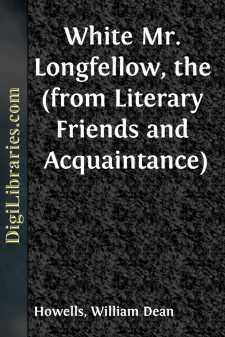 We had expected to stay in Boston only until we could find a house in Old Cambridge. This was not so simple a matter as it might seem; for the ancient town had not yet quickened its scholarly pace to the modern step. Indeed, in the spring of 1866 the impulse of expansion was not yet visibly felt anywhere; the enormous material growth that followed the civil war had not yet begun. In Cambridge the houses to be let were few, and such as there were fell either below our pride or rose above our purse. I wish I might tell how at last we bought a house; we had no money, but we were rich in friends, who are still alive to shrink from the story of their constant faith in a financial future which we sometimes doubted, and who backed their credulity with their credit. It is sufficient for the present record, which professes to be strictly literary, to notify the fact that on the first day of May, 1866, we went out to Cambridge and began to live in a house which we owned in fee if not in deed, and which was none the less valuable for being covered with mortgages. Physically, it was a carpenter's box, of a sort which is readily imagined by the Anglo-American genius for ugliness, but which it is not so easy to impart a just conception of. A trim hedge of arbor-vita; tried to hide it from the world in front, and a tall board fence behind; the little lot was well planted (perhaps too well planted) with pears, grapes, and currants, and there was a small open space which I lost no time in digging up for a kitchen-garden. On one side of us were the open fields; on the other a brief line of neighbor-houses; across the street before us was a grove of stately oaks, which I never could persuade Aldrich had painted leaves on them in the fall. We were really in a poor suburb of a suburb; but such is the fascination of ownership, even the ownership of a fully mortgaged property, that we calculated the latitude and longitude of the whole earth from the spot we called ours. In our walks about Cambridge we saw other places where we might have been willing to live; only, we said, they were too far off: We even prized the architecture of our little box, though we had but so lately lived in a Gothic palace on the Grand Canal in Venice, and were not uncritical of beauty in the possessions of others. Positive beauty we could not have honestly said we thought our cottage had as a whole, though we might have held out for something of the kind in the brackets of turned wood under its eaves. But we were richly content with it; and with life in Cambridge, as it began to open itself to us, we were infinitely more than content. This life, so refined, so intelligent, so gracefully simple, I do not suppose has anywhere else had its parallel.

It was the moment before the old American customs had been changed by European influences among people of easier circumstances; and in Cambridge society kept what was best of its village traditions, and chose to keep them in the full knowledge of different things. Nearly every one had been abroad; and nearly every one had acquired the taste for olives without losing a relish for native sauces; through the intellectual life there was an entire democracy, and I do not believe that since the capitalistic era began there was ever a community in which money counted for less. There was little show of what money could buy; I remember but one private carriage (naturally, a publisher's); and there was not one livery, except a livery in the larger sense kept by the stableman Pike, who made us pay now a quarter and now a half dollar for a seat in his carriages, according as he lost or gathered courage for the charge. We thought him extortionate, and we mostly walked through snow and mud of amazing depth and thickness.

The reader will imagine how acceptable this circumstance was to a young literary man beginning life with a fully mortgaged house and a salary of untried elasticity. If there were distinctions made in Cambridge they were not against literature, and we found ourselves in the midst of a charming society, indifferent, apparently, to all questions but those of the higher education which comes so largely by nature. That is to say, in the Cambridge of that day (and, I dare say, of this) a mind cultivated in some sort was essential, and after that came civil manners, and the willingness and ability to be agreeable and interesting; but the question of riches or poverty did not enter. Even the question of family, which is of so great concern in New England, was in abeyance. Perhaps it was taken for granted that every one in Old Cambridge society must be of good family, or he could not be there; perhaps his mere residence tacitly ennobled him; certainly his acceptance was an informal patent of gentility. To my mind, the structure of society was almost ideal, and until we have a perfectly socialized condition of things I do not believe we shall ever have a more perfect society. The instincts which governed it were not such as can arise from the sordid competition of interests; they flowed from a devotion to letters, and from a self-sacrifice in material things which I can give no better notion of than by saying that the outlay of the richest college magnate seemed to be graduated to the income of the poorest.

In those days, the men whose names have given splendor to Cambridge were still living there. I shall forget some of them in the alphabetical enumeration of Louis Agassiz, Francis J. Child, Richard Henry Dana, Jun., John Fiske, Dr. Asa Gray, the family of the Jameses, father and sons, Lowell, Longfellow, Charles Eliot Norton, Dr. John G. Palfrey, James Pierce, Dr. Peabody, Professor Parsons, Professor Sophocles. The variety of talents and of achievements was indeed so great that Mr....