While Caroline Was Growing 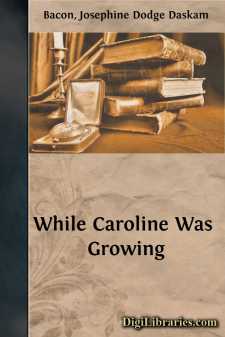 AN IDYL OF THE ROAD

aroline rocked herself back and forth from her waist, defying the uncompromisingly straight chair which inclosed her portly little person.

Out of the window the spring was coming on, in waves of tree-bloom and bright grass; the birds bickered sweetly in the sun-patches; everything was reaching on tiptoe for the delicious thrill of May—and she was bounding Connecticut! It was idiotic. What was a knowledge of the uninteresting limits of her native State compared to that soft fresh wind on her cheek, that indescribable odor of brown earth?

Two fat birds descended with a twitter into a crystal rain-pool, and bathed, with splashes of spray; Caroline's feet itched in her ribbed stockings. A soiled and freckled boy, bare from the knees, whistled by the window, jangling a can of bait, his pole balanced prettily on one ragged shoulder. As he reached the puddle, a pure inconsequence of good feeling seized him, and he splashed deliberately in it, grinning around him. Caroline mechanically bent and unbuttoned the top button of her stout boots. He caught her eye.

"Where you going?" she called through the glass.

"Oh, I d'no—anywheres, I guess!" he answered invitingly. "Want to come?"

"And so ought he—you ought to be ashamed of yourself, calling through the window to that Simms boy!" cried a disgusted voice. Caroline twitched her shoulder spitefully.

"A great girl like you, too! Why, he's no better than a common tramp, that boy," proceeded the voice. "Look at his clothes!"

"Nobody wears good clothes to go fishing," Caroline grumbled. "I wish he had mine!"

"Fishing! He never wears them anywhere. He hasn't got them to wear. And he'd be glad enough to get yours, I can tell you."

"He wouldn't do any such thing! He told me Saturday he'd rather be a dog than a girl; he'd get more use of his legs!"

There was a scandalized silence. Caroline waited grimly.

"What are you doing?" said the voice at last. "Studying my jography," she replied.

"I can't, if everybody talks to me all the time," she muttered sullenly.

Nevertheless she resumed her rocking and crooning.

The housemaid appeared just under the window, dragging a small step-ladder and a pail of glistening, soapy water. Her head was coifed in a fresh starched towel, giving her the appearance of a holy sister of some clean blue-and-white order; her eyes were large and mournful. She appealed instantly to Caroline's imagination.

"Oh, Katy, what a lovely Mother Superior you would make!" she cried enthusiastically.