When Winter Comes to Main Street 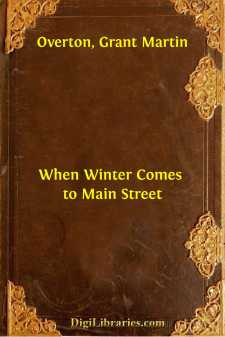 Chapter I THE COURAGE OF HUGH WALPOLE

Says his American contemporary, Joseph Hergesheimer, in an appreciation of Hugh Walpole: “Mr. Walpole’s courage in the face of the widest scepticism is nowhere more daring than in The Golden Scarecrow.” Mr. Walpole’s courage, I shall always hold, is nowhere more apparent than in the choice of his birthplace. He was born in the Antipodes. Yes! In that magical, unpronounceable realm one reads about and intends to look up in the dictionary.... The precise Antipodean spot was Auckland, New Zealand, and the year was 1884.

The Right Reverend George Henry Somerset Walpole, D.D., Bishop of Edinburgh since 1910, had been sent in 1882 to Auckland as Incumbent of St. Mary’s Pro-Cathedral, and the same ecclesiastical fates which took charge of Hugh Seymour Walpole’s birthplace provided that, at the age of five, the immature novelist should be transferred to New York. Dr. Walpole spent the next seven years in imparting to students of the General Theological Seminary, New York, their knowledge of Dogmatic Theology. Hugh Seymour Walpole spent the seven years in attaining the age of twelve.

Then, in 1896, the family returned to England. Perhaps a tendency to travel had by this time become implanted in Hugh, for now, in his late thirties, he is one of the most peripatetic of writers. He is here, he is there. You write to him in London and receive a reply from Cornwall or the Continent. And, regularly, he comes over to America. Of all the English novelists who have visited this country he is easily the most popular personally on this side. His visit this autumn (1922) will undoubtedly multiply earlier welcomes.

Interest in Walpole the man and Walpole the novelist shows an increasing tendency to become identical. It is all very well to say that the man is one thing, his books are quite another; but suppose the man cannot be separated from his books? The Walpole that loved Cornwall as a lad can’t be dissevered from the “Hugh Seymour” of The Golden Scarecrow; without his Red Cross service in Russia during the Great War, Walpole could not have written The Dark Forest; and I think the new novel he offers us this autumn must owe a good deal to direct reminiscence of such a cathedral town as Durham, to which the family returned when Hugh was twelve.

The Cathedral, as the new book is called, rests the whole of its effect upon just such an edifice as young Hugh was familiar with. The Cathedral of the story stands in Polchester, in the west of England, in the county of Glebeshire—that mythical yet actual county of Walpole’s other novels. Like such tales as The Green Mirror and The Duchess of Wrexe, the aim is threefold—to give a history of a certain group of people and, at the same time, (2) to be a comment on English life, and, beyond that, (3) to offer a philosophy of life itself.

The innermost of the three circles of interest created in this powerful novel—like concentric rings formed by dropping stones in water—concerns the life of Archdeacon Brandon....