When the West Was Young 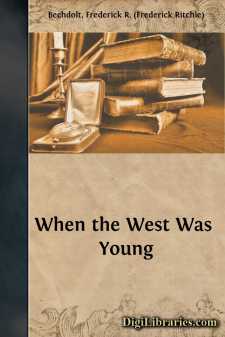 HOW DEATH VALLEY WAS NAMED

There were three of us sitting on a pile of lumber in a sun-baked little mining town down near the Arizona border. One of my companions was the sheriff of the county and the other was an old man with snowy beard and sky-blue eyes whom every one called “Mac.” To look at him was to behold a vision of the past.

As we were whiling away the time with idle talk something was said which aroused the spirit of reminiscence within this survivor of the unfenced West. He closed his jack-knife with a snap, threw away a pine stick from which he had been peeling shavings, and turning his sky-blue eyes on the sheriff, “I remember––” he began.

After which he told of cheating Death in quicksand fords, of day-long battles with naked Apaches in the malapi, of fighting off bandits from the stage while the driver kept the horses on a run up Dragoon Pass, of grim old ranchmen stalking cattle-thieves by night, of frontier sheriffs and desperadoes and a wilderness that was more savage than the wild riders who sought sanctuary within its arid solitudes. He did not talk for more than forty-five minutes at the most and the words came slowly from his lips, but when he had done my head was spinning from more visions of bold men and large deeds than it had held since the Christmas night when I reeled off to bed after bolting a full half of the “Boy’s Froissart.”

And after that old man had sauntered away in the hot-white Arizona sunshine I thought of other grizzled chroniclers to whom I had listened in other parts of the West. Some of their tales came back to me, straightforward simple stories of the days before the farmers, barbed-wire fences, and branch railroad lines; and I marveled at the richness of a lore whose plain unvarnished narratives of fact stand out with values exceeding those of most adventure fiction, more vivid and colorful than the anecdotes of the Middle Ages which the French chronicler set down for all the world to read.

Every State between the Mississippi and the Pacific has its own stories of deeds that took place during an era when even the lawbreakers attained a certain harsh nobility, and when plain men must prove themselves heroic if they would survive. The names of many heroes in these tales have become like household words all over the United States, and what they did in many places is printed on the maps of school geographies; but there is a vanished legion of those old-timers who are remembered only in the immediate neighborhoods where they lived swiftly and died hard. Emigrant and prospector, pioneer and Indian chief, cow-boy and cattle-thief, sheriff, stage-robber, and pony express rider––only the old men can tell their stories now.

All of those men, whether they be famous or forgotten, owned a common virtue which still survives among the people who came after them. That pioneer spirit which makes the average American eager to try what no one else has done is the common motive in the tales of their exploits. It stands out strongly in this story which tells how Death Valley got its name....