When the Cock Crows 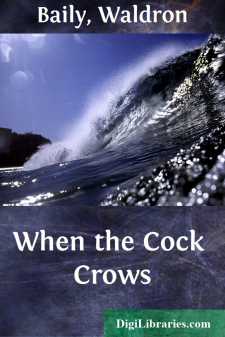 The tide was at ebb. The noisily rushing spume-spotted waters of the sea were pounding the hard-sand shore of the easterly side of a beautiful island, nestling as a jewel in its setting just within the Capes, which form the shores on either side of Beaufort Inlet, but so exposed that when the winds blow from the sea the full force of the breakers is felt at this point. As this small bit of land is low-lying, more than once when a southeaster has raged, the tiny isle has become entirely submerged.

Man has placed but one habitation upon this toy of the great waters, and that a fisherman's shack, surrounded with the usual net-drying racks and other crude tools of the fisherfolk. One would rightly guess that the occupant of an abode built upon such a tiny bit of old mother earth must be a hardy customer, who understood the ways of the winds and sea and who dared combat them.

It is sunrise. The door of the hut swings on its heavy hinges. A sturdy-looking old fellow with grizzled beard and flowing locks steps out of the shack, and, as has been his wont for years, he scans the horizon for a sail or perchance for other more modern craft of the sea.

In his arms, he is tenderly carrying a large Dominick rooster, which, judging from his length of spurs, and scaly legs, has lingered many summers. Satisfying himself that there is no boat in sight, to break the monotony of the view, Captain Ichabod places his only living companion—as he expresses it, his poultry alarm clock—upon the ground, and from a pocket produces a handful of corn, which the old cock greedily devours.

These two have been companions for a long time. Captain Ichabod found him one morning perched upon the top of a floating crate, washed from the deck of a schooner that had gone upon the beach in a booming southeaster. The Captain had proved a life-saver indeed to the proud old bird. Ichabod, when he first spied Shrimp, as he afterward named this bit of flotsam, was wildly anxious to save the creature so it might have a life on shore suited to its nature and desires. Then it flashed upon him that his antiquated and well-worn alarm clock had ceased to work. It occurred to him that the rooster's crowing would suffice to advise him of the hour, and that there would be no need to buy another clock.

The Captain was a woman-hater. This fact accounted for his choosing to live as a hermit on the bit of sand, which he had grown to love. But that loneliness was a trial to Shrimp, who naturally desired a harem of his own. Many times, when the wind was from the mainland, Captain Ichabod had heard the far-away crow of a barnyard fowl, and had gravely and criticizingly listened as Shrimp returned the salute in lusty manner. He had seen the bird swell in rage, and his comb turn red in jealous envy of the other rooster on the mainland.

Captain Ichabod had now come to busying himself with fishing by hook and line for blue fish and sheepshead. In addition he set a line of gill nets in the cove for mullet or any other fish that might become entangled within their meshes....