When Grandmamma Was New The Story of a Virginia Childhood 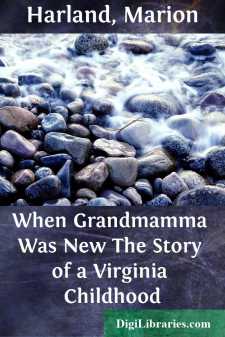 Chapter I The Tragedy of Rozillah

UST look at her now, Molly! Isn't she the sweetest thing you ever saw?"

Molly, that is, Myself, sitting on the door-step, elbows on knees and shoulders hunched sullenly up to my ears, did not budge or speak.

Before my gloomy eyes was the kitchen yard, a gray and gritty expanse, with never a tree or bush to shade it except the lilac hedge bounding it on the garden side, and one sickly peach tree growing at the corner of "the house." Three hens and one rooster were scratching about the flat stone at the kitchen door.

On the other three sides of the house were rustling boughs and cool grass and flower-beds. It suited my humor to sit in the scanty strip of shadow cast by the eaves, my feet upon the step that had soaked in the noonday heat, and to be as wretched as a five-year-old could make herself, with a sharp sense of injury boring like a bit of steel into her small soul. The room behind me was my mother's—the "chamber" of the Southern home. A big four-poster, hung with dimity curtains, stood in the farther corner. The dimity valance, trimmed, like the curtains, with ball fringe, hid the trundle-bed that was pulled out at night for Mary 'Liza and me to sleep in. At the foot of the bed was my baby brother's cradle. As Mam' Chloe was walking with him in the garden, it should have been empty. Whereas, Mary 'Liza was putting her doll-baby to sleep in it. We said "doll-baby" in those days. There was Musidora, my rag-baby, who was a beauty when she was new.

She was not old now, but Fate had been unkind to her. Twice I had left her out-of-doors all night. The first time was when I laid her at the foot of a particularly tall corn-stalk, telling her that I would return presently, but could not find her at all when I went back. I was up and out early next morning and "found her indeed, but it made my heart bleed," for a field mouse—with six acres of roasting-ears to choose from—had made his supper on the bran that served my poor Musidora for brains, nibbling a hole in the exact region of the medulla oblongata. My mother plugged the cranium with raw cotton and stitched up the wound, and the dear patient was doing better than could be expected, when there was a thunder-storm and Musidora was on a bench in the summer-house. The rain lasted all night, and I could not go out again.

One immediate and obvious consequence of this adventure was that there was nothing left of Musidora's features except her eyebrows, which were laid on with indelible ink instead of water-colors. She hung, head downward, in front of the kitchen fire for twelve hours before she was thoroughly dry. My mother "indicated" eyes, nose, and mouth with pen-and-ink, but the effect was flat and mournful.

While I sat in the door that evening, putting on Musidora's night-gown, I overheard Mam' Chloe say to my mother:—

"I declar' to gracious, Miss Ma'y Anna, you ought to buy that chile a sure-'nough doll-baby while you are in town. It f'yar breaks my heart to see how much store she sets by that po' wrack of a rag thing she's got thar."

My mother's reply was so low that I did not catch it, but her tone was not unpromising. I said nothing to her, or to anybody of what I had heard. Only, of course, Musidora and I talked it all over. I assured her that she was going to have a beautiful sister who would love her and play with her and tell her stories of the wonderful city, and of how happy we three should be together.

My father and mother went away to Richmond. They took the baby with them, and Mary 'Liza and I were sent to my Aunt Eliza Carter's to stay until they returned, when Cousin Molly Belle took us back home and told my mother before my face that I had been as "good as gold."

"I am very glad to hear it," said my mother, giving me a squeeze and kiss....