When a Man Marries 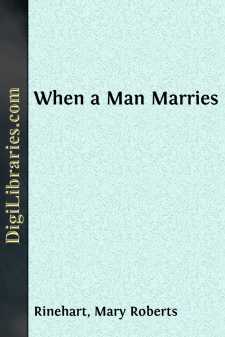 Chapter I. AT LEAST I MEANT WELL

When the dreadful thing occurred that night, every one turned on me. The injustice of it hurt me most. They said I got up the dinner, that I asked them to give up other engagements and come, that I promised all kinds of jollification, if they would come; and then when they did come and got in the papers and every one—but ourselves—laughed himself black in the face, they turned on ME! I, who suffered ten times to their one! I shall never forget what Dallas Brown said to me, standing with a coal shovel in one hand and a—well, perhaps it would be better to tell it all in the order it happened.

It began with Jimmy Wilson and a conspiracy, was helped on by a foot-square piece of yellow paper and a Japanese butler, and it enmeshed and mixed up generally ten respectable members of society and a policeman. Incidentally, it involved a pearl collar and a box of soap, which sounds incongruous, doesn't it?

It is a great misfortune to be stout, especially for a man. Jim was rotund and looked shorter than he really was, and as all the lines of his face, or what should have been lines, were really dimples, his face was about as flexible and full of expression as a pillow in a tight cover. The angrier he got the funnier he looked, and when he was raging, and his neck swelled up over his collar and got red, he was entrancing. And everybody liked him, and borrowed money from him, and laughed at his pictures (he has one in the Hargrave gallery in London now, so people buy them instead), and smoked his cigarettes, and tried to steal his Jap. The whole story hinges on the Jap.

The trouble was, I think, that no one took Jim seriously. His ambition in life was to be taken seriously, but people steadily refused to. His art was a huge joke—except to himself. If he asked people to dinner, every one expected a frolic. When he married Bella Knowles, people chuckled at the wedding, and considered it the wildest prank of Jimmy's career, although Jim himself seemed to take it awfully hard.

We had all known them both for years. I went to Farmington with Bella, and Anne Brown was her matron of honor when she married Jim. My first winter out, Jimmy had paid me a lot of attention. He painted my portrait in oils and had a studio tea to exhibit it. It was a very nice picture, but it did not look like me, so I stayed away from the exhibition. Jim asked me to. He said he was not a photographer, and that anyhow the rest of my features called for the nose he had given me, and that all the Greuze women have long necks. I have not.

After I had refused Jim twice he met Bella at a camp in the Adirondacks and when he came back he came at once to see me. He seemed to think I would be sorry to lose him, and he blundered over the telling for twenty minutes. Of course, no woman likes to lose a lover, no matter what she may say about it, but Jim had been getting on my nerves for some time, and I was much calmer than he expected me to be.

"If you mean," I said finally in desperation, "that you and Bella are—are in love, why don't you say so, Jim?...