What's Wrong with the World 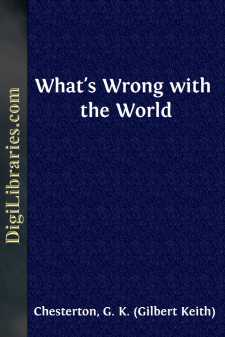 I. THE MEDICAL MISTAKE

A book of modern social inquiry has a shape that is somewhat sharply defined. It begins as a rule with an analysis, with statistics, tables of population, decrease of crime among Congregationalists, growth of hysteria among policemen, and similar ascertained facts; it ends with a chapter that is generally called "The Remedy." It is almost wholly due to this careful, solid, and scientific method that "The Remedy" is never found. For this scheme of medical question and answer is a blunder; the first great blunder of sociology. It is always called stating the disease before we find the cure. But it is the whole definition and dignity of man that in social matters we must actually find the cure before we find the disease.

The fallacy is one of the fifty fallacies that come from the modern madness for biological or bodily metaphors. It is convenient to speak of the Social Organism, just as it is convenient to speak of the British Lion. But Britain is no more an organism than Britain is a lion. The moment we begin to give a nation the unity and simplicity of an animal, we begin to think wildly. Because every man is a biped, fifty men are not a centipede. This has produced, for instance, the gaping absurdity of perpetually talking about "young nations" and "dying nations," as if a nation had a fixed and physical span of life. Thus people will say that Spain has entered a final senility; they might as well say that Spain is losing all her teeth. Or people will say that Canada should soon produce a literature; which is like saying that Canada must soon grow a new moustache. Nations consist of people; the first generation may be decrepit, or the ten thousandth may be vigorous. Similar applications of the fallacy are made by those who see in the increasing size of national possessions, a simple increase in wisdom and stature, and in favor with God and man. These people, indeed, even fall short in subtlety of the parallel of a human body. They do not even ask whether an empire is growing taller in its youth, or only growing fatter in its old age. But of all the instances of error arising from this physical fancy, the worst is that we have before us: the habit of exhaustively describing a social sickness, and then propounding a social drug.

Now we do talk first about the disease in cases of bodily breakdown; and that for an excellent reason. Because, though there may be doubt about the way in which the body broke down, there is no doubt at all about the shape in which it should be built up again. No doctor proposes to produce a new kind of man, with a new arrangement of eyes or limbs. The hospital, by necessity, may send a man home with one leg less: but it will not (in a creative rapture) send him home with one leg extra. Medical science is content with the normal human body, and only seeks to restore it.

But social science is by no means always content with the normal human soul; it has all sorts of fancy souls for sale. Man as a social idealist will say "I am tired of being a Puritan; I want to be a Pagan," or "Beyond this dark probation of Individualism I see the shining paradise of Collectivism." Now in bodily ills there is none of this difference about the ultimate ideal....