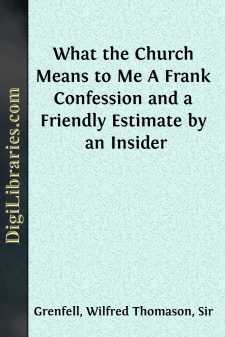 WHAT THE CHURCH MEANS TO ME

The Church to me means all who, consciously or unconsciously, are forwarding God's kingdom on earth. In the broad definition of the Master it means "all those who are not against us." The way in which men associate for worship, or in which they consider it most remunerative to invest their efforts to forward the kingdom, gives them no right to arrogate to themselves the title of God's Church. Any body of men saying, "We are the Church," seems to me ridiculous.

If they try to exclude at the same time those who approach their Maker, or who are endeavoring to do faithfully the things Christ would approve, only in some other way, then they become offensive also. I am firmly convinced the world is coming to this view, and I am glad it is already beginning to express it. Through "the Church" the salvation of the world must come. I have no use whatever for the critic whose heart is set on her destruction or who muckrakes it for a revenue. By this I mean the Church Invisible, known only to God's Holy Spirit.

Standards which Christ would Condemn

The "offense" of the visible churches that tells most against them today in the minds of educated men is not worldliness or unfaithfulness; it is their inability to shake off their untenable position as judges of others. The "Church" in Jesus' day judged him unfit to live. Upon Luther, Wesley, and many of the best servants of the human race the churches to which they belonged passed similar sentences. Even the suggestion of the "holding-up-of-skirts," of this "I-am-holier-than-thou" attitude, because I think differently, is repellent and has not yet met the fate that certainly awaits it, before there can be a reign of universal peace. Science has taught us that doubt, quite as much as faith, leads to the apprehension of truth. There are countless men, skilled in the exact sciences and in scholarship, possessed of wealth and rank, who find it impossible to define their position in words, yet whose humility and charity make us love them, whose deeds are just such as those which have come down the ages as Jesus' own selection for the most convincing evidence of his Sonship of God. We all know today men of inferior attainments and lives who not only know themselves to be infallible, but haven't the grace to leave even such men alone, and who have interpreted their call to the "ministry" as simply a mandate to set every one else intellectually right. I know that that which is hidden from the wise can be revealed to babes, and that our talents—namely, social position, wealth, and brains—merely enlarge in God's sight our capacity for service, and therefore our responsibility. But I know also that the prizes of our high calling can be purchased only by our fidelity in following, and that involves other than intellectual processes.

The Case of the Working Man

As for the working man, to my mind if he doesn't join a visible church today it is simply because he doesn't see any good in it. The teachings of the Church's Master still appeal to him, but the churches to him don't stand for them....