What Social Classes Owe to Each Other 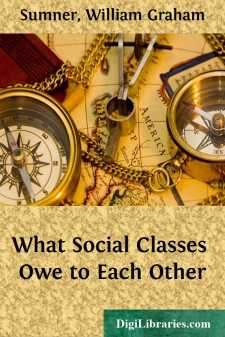 We are told every day that great social problems stand before us and demand a solution, and we are assailed by oracles, threats, and warnings in reference to those problems. There is a school of writers who are playing quite a rôle as the heralds of the coming duty and the coming woe. They assume to speak for a large, but vague and undefined, constituency, who set the task, exact a fulfillment, and threaten punishment for default. The task or problem is not specifically defined. Part of the task which devolves on those who are subject to the duty is to define the problem. They are told only that something is the matter: that it behooves them to find out what it is, and how to correct it, and then to work out the cure. All this is more or less truculently set forth.

After reading and listening to a great deal of this sort of assertion I find that the question forms itself with more and more distinctness in my mind: Who are those who assume to put hard questions to other people and to demand a solution of them? How did they acquire the right to demand that others should solve their world-problems for them? Who are they who are held to consider and solve all questions, and how did they fall under this duty?

So far as I can find out what the classes are who are respectively endowed with the rights and duties of posing and solving social problems, they are as follows: Those who are bound to solve the problems are the rich, comfortable, prosperous, virtuous, respectable, educated, and healthy; those whose right it is to set the problems are those who have been less fortunate or less successful in the struggle for existence. The problem itself seems to be, How shall the latter be made as comfortable as the former? To solve this problem, and make us all equally well off, is assumed to be the duty of the former class; the penalty, if they fail of this, is to be bloodshed and destruction. If they cannot make everybody else as well off as themselves, they are to be brought down to the same misery as others.

During the last ten years I have read a great many books and articles, especially by German writers, in which an attempt has been made to set up "the State" as an entity having conscience, power, and will sublimated above human limitations, and as constituting a tutelary genius over us all. I have never been able to find in history or experience anything to fit this concept. I once lived in Germany for two years, but I certainly saw nothing of it there then. Whether the State which Bismarck is moulding will fit the notion is at best a matter of faith and hope. My notion of the State has dwindled with growing experience of life. As an abstraction, the State is to me only All-of-us. In practice—that is, when it exercises will or adopts a line of action—it is only a little group of men chosen in a very haphazard way by the majority of us to perform certain services for all of us. The majority do not go about their selection very rationally, and they are almost always disappointed by the results of their own operation....