What Men Live By and Other Tales 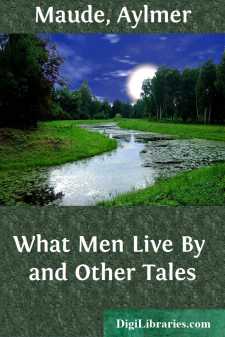 "I'm quite warm," said he, "though I have no sheep-skin coat. I've had a drop, and it runs through all my veins. I need no sheep-skins. I go along and don't worry about anything. That's the sort of man I am! What do I care? I can live without sheep-skins. I don't need them. My wife will fret, to be sure. And, true enough, it is a shame; one works all day long, and then does not get paid. Stop a bit! If you don't bring that money along, sure enough I'll skin you, blessed if I don't. How's that? He pays twenty kopeks at a time! What can I do with twenty kopeks? Drink it-that's all one can do! Hard up, he says he is! So he may be—but what about me? You have a house, and cattle, and everything; I've only what I stand up in! You have corn of your own growing; I have to buy every grain. Do what I will, I must spend three roubles every week for bread alone. I come home and find the bread all used up, and I have to fork out another rouble and a half. So just pay up what you owe, and no nonsense about it!"

By this time he had nearly reached the shrine at the bend of the road. Looking up, he saw something whitish behind the shrine. The daylight was fading, and the shoemaker peered at the thing without being able to make out what it was. "There was no white stone here before. Can it be an ox? It's not like an ox. It has a head like a man, but it's too white; and what could a man be doing there?"

He came closer, so that it was clearly visible. To his surprise it really was a man, alive or dead, sitting naked, leaning motionless against the shrine. Terror seized the shoemaker, and he thought, "Some one has killed him, stripped him, and left him there. If I meddle I shall surely get into trouble."

So the shoemaker went on. He passed in front of the shrine so that he could not see the man. When he had gone some way, he looked back, and saw that the man was no longer leaning against the shrine, but was moving as if looking towards him. The shoemaker felt more frightened than before, and thought, "Shall I go back to him, or shall I go on? If I go near him something dreadful may happen. Who knows who the fellow is? He has not come here for any good. If I go near him he may jump up and throttle me, and there will be no getting away. Or if not, he'd still be a burden on one's hands. What could I do with a naked man? I couldn't give him my last clothes. Heaven only help me to get away!"

So the shoemaker hurried on, leaving the shrine behind him-when suddenly his conscience smote him, and he stopped in the road.

"What are you doing, Simon?" said he to himself. "The man may be dying of want, and you slip past afraid. Have you grown so rich as to be afraid of robbers? Ah, Simon, shame on you!"

So he turned back and went up to the man.

Simon approached the stranger, looked at him, and saw that he was a young man, fit, with no bruises on his body, only evidently freezing and frightened, and he sat there leaning back without looking up at Simon, as if too faint to lift his eyes....