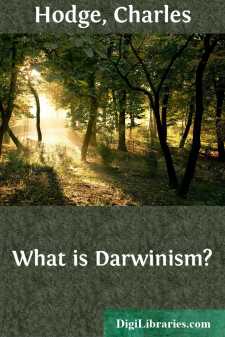 Add to My Favorites
Published: 9 years ago
Downloads: 99
Rating: (0 Votes)

This is a question which needs an answer. Great confusion and diversity of opinion prevail as to the real views of the man whose writings have agitated the whole world, scientific and religious. If a man says he is a Darwinian, many understand him to avow himself virtually an atheist; while another understands him as saying that he adopts some harmless form of the doctrine of evolution. This is a great evil.

It is obviously useless to discuss any theory until we are agreed as to what that theory is. The question, therefore, What is Darwinism? must take precedence of all discussion of its merits.

The great fact of experience is that the universe exists. The great problem which has ever pressed upon the human mind is to account for its existence. What was its origin? To what causes are the changes we witness around us to be referred? As we are a part of the universe, these questions concern ourselves. What are the origin, nature, and destiny of man? Professor Huxley is right in saying, "The question of questions for mankind—the problem which underlies all others, and is more interesting than any other—is the ascertainment of the place which Man occupies in nature and of his relation to the universe of things. Whence our race has come, what are the limits of our power over nature, and of nature's power over us, to what goal are we tending, are the problems which present themselves anew and with undiminished interest to every man born into the world." Mr. Darwin undertakes to answer these questions. He proposes a solution of the problem which thus deeply concerns every living man. Darwinism is, therefore, a theory of the universe, at least so far as the living organisms on this earth are concerned. This being the case, it may be well to state, in few words, the other prevalent theories on this great subject, that the points of agreement and of difference between them and the views of Mr. Darwin may be the more clearly seen.

The Scriptural Solution of the Problem of the Universe.

That solution is stated in words equally simple and sublime: "In the beginning God created the heavens and the earth." We have here, first, the idea of God. The word God has in the Bible a definite meaning. It does not stand for an abstraction, for mere force, for law or ordered sequence. God is a spirit, and as we are spirits, we know from consciousness that God is, (1.) A Substance; (2.) That He is a person; and, therefore, a self-conscious, intelligent, voluntary agent. He can say I; we can address Him as Thou; we can speak of Him as He or Him. This idea of God pervades the Scriptures. It lies at the foundation of natural religion. It is involved in our religious consciousness. It enters essentially into our sense of moral obligation. It is inscribed ineffaceably, in letters more or less legible, on the heart of every human being. The man who is trying to be an atheist is trying to free himself from the laws of his being. He might as well try to free himself from liability to hunger or thirst.

The God of the Bible, then, is a Spirit, infinite, eternal, and unchangeable in his being, wisdom, power, holiness, goodness, and truth. As every theory must begin with some postulate, this is the grand postulate with which the Bible begins. This is the first point.

The second point concerns the origin of the universe. It is not eternal either as to matter or form. It is not independent of God. It is not an evolution of his being, or his existence form. He is extramundane as well as antemundane. The universe owes its existence to his will.

Thirdly, as to the nature of the universe; it is not a mere phenomenon. It is an entity, having real objective existence, or actuality. This implies that matter is a substance endowed with certain properties, in virtue of which it is capable of acting and of being acted upon....