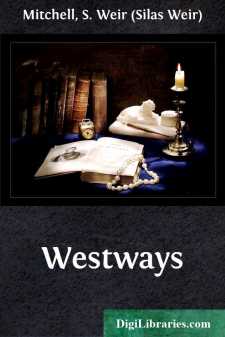 The first Penhallow crossed the Alleghanies long before the War for Independence and on the frontier of civilisation took up land where the axe was needed for the forest and the rifle for the Indian. He made a clearing and lived a hard life of peril, wearily waiting for the charred stumps to rot away.

The younger men of the name in Colonial days and later left the place early, and for the most part took to the sea or to the army, if there were activity in the way of war. In later years, others drifted westward on the tide of border migration, where adventure was always to be had. This stir of enterprise in a breed tends to extinction in the male lines. Men are thinned out in their wooing of danger—the belle dame sans merci. Thus there were but few Penhallows alive at any one time, and yet for many years they bred in old-fashioned numbers.

As time ran on, a Penhallow prospered in the cities, and clinging to the land added fresh acres as new ambitions developed qualities which are not infrequently found in descendants of long-seated American families. It was not then, nor is it now, rare in American life to find fortune-favoured men returning in later days to the homes of their youth to become useful in many ways to the communities they loved. One of these, James Penhallow,—and there was always a James,—after greatly prospering in the ventures of the China trade, was of the many who about 1800 bought great tracts of land on the farther slope of the Pennsylvania Alleghanies. His own purchases lay near and around the few hundred acres his ancestor took up and where an aged cousin was left in charge of the farm-house. When this tenant died, the house decayed, and the next Penhallow weary of being taxed for unproductive land spent a summer on the property, and with the aid of engineers found iron in plenty and soft coal. He began about 1830 to develop the property, and built a large house which he never occupied and which was long known in the county as "Penhallow's Folly." It was considered the more notably foolish because of being set, in unAmerican fashion, deep in the woods, and remote from the highway. What was believed to be the oldest pine-tree in the county gave to the place the popular name of "Grey Pine" and being accepted by the family when they came there to live, "Penhallow's Folly" ceased to be considered descriptive.

The able and enterprising discoverer of mines had two sons. One of them, the youngest, married late in life, and dying soon after left a widow and a posthumous son John, of whom more hereafter. The elder brother was graduated from West Point, served some years with distinction, and marrying found himself obliged to resign his captaincy on his father's death to take charge of the iron-mills and mines, which had become far more important to the family than their extensive forest-holdings on the foot-hills of the western watershed of the Alleghanies.

The country had long been well settled. The farmers thrived as the mills and mines needed increasing supplies of food and the railway gave access to market....