Westminster Sermons with a Preface 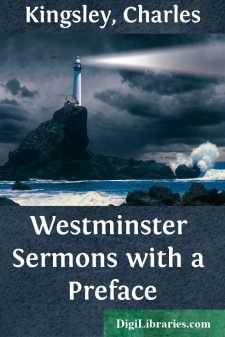 SERMON I.  THE MYSTERY OF THE CROSS.  A GOOD FRIDAY SERMON.

Let this mind be in you, which was also in Christ Jesus: who, being in the form of God, thought it not robbery to be equal with God: but made Himself of no reputation, and took upon Him the form of a slave, and was made in the likeness of men: and being found in fashion as a man, He humbled Himself, and became obedient unto death, even the death of the Cross.

The second Lesson for this morning’s service, and the chapter which follows it, describe the Passion of our Lord Jesus Christ, both God and Man.  They give us the facts, in language most awful from its perfect calmness, most pathetic from its perfect simplicity.  But the passage of St Paul which I have chosen for my text gives us an explanation of those facts which is utterly amazing.  That He who stooped to die upon the Cross is Very God of Very God, the Creator and Sustainer of the Universe, is a thought so overwhelming, whenever we try to comprehend even a part of it in our small imaginations, that it is no wonder if, in all ages, many a pious soul, as it contemplated the Cross of Christ, has been rapt itself into a passion of gratitude, an ecstasy of wonder and of love, which is beautiful, honourable, just, and in the deepest sense most rational, whenever it is spontaneous and natural.

But there have been thousands, as there may be many here to-day, of colder temperament; who would distrust in themselves, even while they respected in others, any violence of religious emotion: yet they too have found, and you too may find, in contemplating the Passion of Christ, a satisfaction deeper than that of any emotion; a satisfaction not to the heart, still less to the brain, but to that far deeper and diviner faculty within us all—our moral sense; that God-given instinct which makes us discern and sympathise with all that is beautiful and true and good.

And so it has befallen, for eighteen hundred years, that thousands who have thought earnestly and carefully on God and on the character of God, on man and on the universe, and on their relation to Him who made them both, have found in the Incarnation and the Passion of the Son of God the perfect satisfaction of their moral wants; the surest key to the facts of the spiritual world; the complete assurance that, in spite of all seeming difficulties and contradictions, the Maker of the world was a Righteous Being, who had founded the world in righteousness; that the Father of Spirits was a perfect Father, who in His only-begotten Son had shewn forth His perfectness, in such a shape and by such acts that men might not only adore it, but sympathise with it; not only thank Him for it, but copy it; and become, though at an infinite distance, perfect as their Father in heaven is perfect, and full of grace and truth, like that Son who is the brightness of His Father’s glory, and the express image of His person.  Such a satisfaction have they found in looking upon the triumphal entry into Jerusalem of Him who knew that it would be followed by the revolt of the fickle mob, and the desertion of His disciples, and the Cross of Calvary, and all the hideous circumstances of a Roman malefactor’s death.

But there have been those, and there are still, who have found no such satisfaction in the story which the Gospel tells, and still less in the explanation which the Epistle gives; who have, as St Paul says, stumbled at the stumblingblock of the Cross.

It would be easy to ignore such persons, were they scoffers or profligates: but when they number among their ranks men of virtuous lives, of earnest and most benevolent purposes, of careful and learned thought, and of a real reverence for God, or for those theories of the universe which some of them are inclined to substitute for God, they must at least be listened to patiently, and answered charitably, as men who, however faulty their opinions may be, prove, by their virtue and their desire to do good, that if they have lost sight of Christ, Christ has not lost sight of them.

To such men the idea of the Incarnation, and still more, that of the Passion, is derogatory to the very notion of a God.  That a God should suffer, and that a God should die, is shocking—and, to do them justice, I believe they speak sincerely—to their notions of the absolute majesty, the undisturbed serenity, of the Author of the universe; of Him in whom all things live and move and have their being; who dwells in the light to which none may approach.  And therefore they have, in every age, tried various expedients to escape from a doctrine which seemed repugnant to that most precious part of them, their moral sense.  In the earlier centuries of the Church they tried to shew that St John and St Paul spoke, not of one who was Very God of Very God, but of some highest and most primeval of all creatures, Emanation, Æon, or what not.  In these later times, when the belief in such beings, and even their very names, have become dim and dead, men have tried to shew that the words of Scripture apply to a mere man.  They have seen in Christ—and they have reverenced and loved Him for what they have seen in Him—the noblest and purest, the wisest and the most loving of all human beings; and have attributed such language as that in the text, which—translate it as you will—ascribes absolute divinity, and nothing less, to our Lord Jesus Christ—they have attributed it, I say, to some fondness for Oriental hyperbole, and mystic Theosophy, in the minds of the Apostles.  Others, again, have gone further, and been, I think, more logically honest.  They have perceived that our Lord Jesus Christ Himself, as His words are reported, attributed divinity to Himself, just as much as did His Apostles.  Such a saying as that one, “Before Abraham was, I am,” and others beside it, could be escaped from only by one of two methods.  To the first of them I shall not allude in this sacred place, popular as a late work has made it in its native France, and I fear in England likewise.  The other alternative, more reverent indeed, but, as I believe, just as mistaken, is to suppose that the words were never uttered at all; that Christ—it is not I who say it—possibly never existed at all; that His whole story was gradually built up, like certain fabulous legends of Romish saints, out of the moral consciousness of various devout persons during the first three centuries; each of whom added to the portrait, as it grew more and more lovely under the hands of succeeding generations, some new touch of beauty, some fresh trait, half invented, half traditional, of purity, love, nobleness, majesty; till men at last became fascinated with the ideal to which they themselves had contributed; and fell down and worshipped their own humanity; and christened that The Son of God....