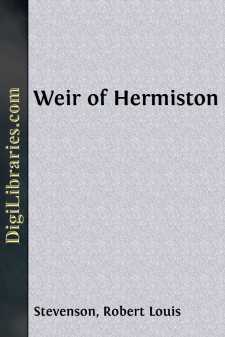 The Lord Justice-Clerk was a stranger in that part of the country; but his lady wife was known there from a child, as her race had been before her.  The old “riding Rutherfords of Hermiston,” of whom she was the last descendant, had been famous men of yore, ill neighbours, ill subjects, and ill husbands to their wives though not their properties.  Tales of them were rife for twenty miles about; and their name was even printed in the page of our Scots histories, not always to their credit.  One bit the dust at Flodden; one was hanged at his peel door by James the Fifth; another fell dead in a carouse with Tom Dalyell; while a fourth (and that was Jean’s own father) died presiding at a Hell-Fire Club, of which he was the founder.  There were many heads shaken in Crossmichael at that judgment; the more so as the man had a villainous reputation among high and low, and both with the godly and the worldly.  At that very hour of his demise, he had ten going pleas before the Session, eight of them oppressive.  And the same doom extended even to his agents; his grieve, that had been his right hand in many a left-hand business, being cast from his horse one night and drowned in a peat-hag on the Kye-skairs; and his very doer (although lawyers have long spoons) surviving him not long, and dying on a sudden in a bloody flux.

In all these generations, while a male Rutherford was in the saddle with his lads, or brawling in a change-house, there would be always a white-faced wife immured at home in the old peel or the later mansion-house.  It seemed this succession of martyrs bided long, but took their vengeance in the end, and that was in the person of the last descendant, Jean.  She bore the name of the Rutherfords, but she was the daughter of their trembling wives.  At the first she was not wholly without charm.  Neighbours recalled in her, as a child, a strain of elfin wilfulness, gentle little mutinies, sad little gaieties, even a morning gleam of beauty that was not to be fulfilled.  She withered in the growing, and (whether it was the sins of her sires or the sorrows of her mothers) came to her maturity depressed, and, as it were, defaced; no blood of life in her, no grasp or gaiety; pious, anxious, tender, tearful, and incompetent.

It was a wonder to many that she had married—seeming so wholly of the stuff that makes old maids.  But chance cast her in the path of Adam Weir, then the new Lord-Advocate, a recognised, risen man, the conqueror of many obstacles, and thus late in the day beginning to think upon a wife.  He was one who looked rather to obedience than beauty, yet it would seem he was struck with her at the first look.  “Wha’s she?” he said, turning to his host; and, when he had been told, “Ay,” says he, “she looks menseful.  She minds me—”; and then, after a pause (which some have been daring enough to set down to sentimental recollections), “Is she releegious?” he asked, and was shortly after, at his own request, presented.  The acquaintance, which it seems profane to call a courtship, was pursued with Mr....