Weighed and Wanting Addresses on the Ten Commandments 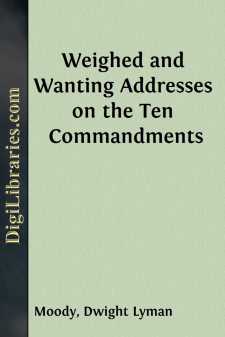 I. Thou shalt have no other gods before me.

II. Thou shalt not make unto thee any graven image, or any likeness of any thing that is in heaven above, or that is in the earth beneath, or that is in the water under the earth: thou shalt not bow down thyself to them, nor serve them: for I the Lord thy God am a jealous God, visiting the iniquity of the fathers upon the children unto the third and fourth generation of them that hate Me; and shewing mercy unto thousands of them that love Me, and keep My commandments.

III. Thou shalt not take the name of the Lord thy God in vain; for the Lord will not hold him guiltless that taketh His name in vain.

V. Honour thy father and thy mother: that thy days may be long upon the land which the Lord thy God giveth thee.

VI. Thou shalt not kill.

VII. Thou shalt not commit adultery.

VIII. Thou shalt not steal.

IX. Thou shalt not bear false witness against thy neighbour.

Weighed in the Balances

In the fifth chapter of Daniel we read the history of King Belshazzar. One chapter tells us all we know about him. One short sight of his career is all we have. He bursts in upon the scene and then disappears.

We are told that he made a great feast to a thousand of his lords, and drank wine before them. In those days a feast would sometimes last for six months in Eastern countries. How long this feast had been going on we are not told, but in the midst of it, he “commanded to bring the golden and silver vessels which his father Nebuchadnezzar had taken out of the temple which was in Jerusalem; that the king, and his princes, his wives, and his concubines, might drink therein. Then they brought the golden vessels that were taken out of the temple of the house of God which was at Jerusalem; and the king, and his princes, his wives, and his concubines, drank in them. They drank wine, and praised the gods of gold, and of silver, of brass, of iron, of wood, and of stone.”

While this impious act was being committed, “in the same hour came forth fingers of a man’s hand, and wrote over against the candlestick upon the plaister of the wall of the king’s palace; and the king saw the part of the hand that wrote.” We are not told at what hour of the day or the night it happened. Perhaps it was midnight. Perhaps nearly all the guests were more or less under the influence of drink; but they were not so drunk but that they suddenly became sober as they saw something that was supernatural—a handwriting on the wall, right over the golden candlestick....