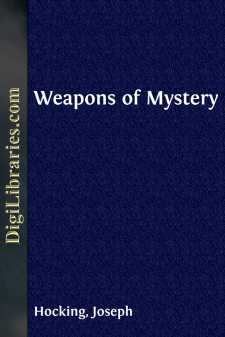 CHAPTER I INTRODUCES THE WRITER AND OTHERS

My story begins on the morning of December 18, 18—, while sitting at breakfast. Let it be understood before we go further that I was a bachelor living in lodgings. I had been left an orphan just before I came of age, and was thus cast upon the world at a time when it is extremely dangerous for young men to be alone. Especially was it so in my case, owing to the fact that at twenty-one I inherited a considerable fortune. One thing saved me from ruin, viz. a passionate love for literature, which led me to make it my profession. I had at the time of my story been following the bent of my inclinations for two years with a fair amount of success, and was regarded by those who knew me as a lucky fellow. That is all I think I need say concerning myself prior to the time when my story opens, except to tell my name; but that will drop out very soon. I had not made very great inroads into the omelette my landlady had prepared for me when I heard the postman's knock, and soon after a servant entered with a letter. One only. I had expected at least half-a-dozen, but only one lay on the tray before me.

"Quite sure, sir," said Jane, smiling, and then with a curtsey she took her leave.

The envelope was addressed in a bold hand-writing to—

"Surely I know the writing," I mused, and then began to look at the postmarks as if a letter were something of very uncommon occurrence. I could make nothing of the illegible smear in the corner, however, and so opened it, and read as follows:—

I suppose you have about forgotten your old schoolfellow, Tom Temple, and it's natural you should; but he has not forgotten you. You see, you have risen to fame, and I have remained in obscurity. Ah well, such is the fate of that community called 'country gentlemen.' But this is not what I want to write about, and I am going straight to the real object of this letter.

We—that is, mother, the girls, and myself—are contemplating a real jolly Christmas. We are inviting a few friends to spend Christmas and New Year with us, and we wish you to make one of the number. Will you come and spend a fortnight or so at Temple Hall? Of course it is rather quiet here, but we are going to do our best to make it more lively than usual. The weather looks frosty, and that promises skating. We have a few good horses, so that we can have some rides across the country. There is also plenty of shooting, hunting, etc., etc. Altogether, if you will come and help us; we can promise a fairly good bill of fare. What do you say? You must excuse me for writing in this unconventional strain, but I can't write otherwise to my old schoolfellow.

We shall all be really disappointed if you say 'no,' so write at once and tell us you will come, also when we may expect you. All the news when we meet.

P.S.—I might say that most of the guests will arrive on Christmas Eve....