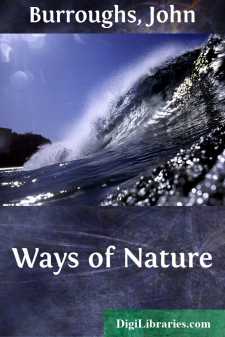 I was much amused lately by a half-dozen or more letters that came to me from some Californian schoolchildren, who wrote to ask if I would please tell them whether or not birds have sense. One little girl said: "I would be pleased if you would write and tell me if birds have sense. I wanted to see if I couldn't be the first one to know." I felt obliged to reply to the children that we ourselves do not have sense enough to know just how much sense the birds and other wild creatures do have, and that they do appear to have some, though their actions are probably the result of what we call instinct, or natural prompting, like that of the bean-stalk when it climbs the pole. Yet a bean-stalk will sometimes show a kind of perversity or depravity that looks like the result of deliberate choice. Each season, among my dozen or more hills of pole-beans, there are usually two or three low-minded plants that will not climb the poles, but go groveling upon the ground, wandering off among the potato-vines or cucumbers, departing utterly from the traditions of their race, becoming shiftless and vagrant. When I lift them up and wind them around the poles and tie them with a wisp of grass, they rarely stay. In some way they seem to get a wrong start in life, or else are degenerates from the first. I have never known anything like this among the wild creatures, though it happens often enough among our own kind. The trouble with the bean is doubtless this: the Lima bean is of South American origin, and in the Southern Hemisphere, beans, it seems, go the other way around the pole; that is, from right to left. When transferred north of the equator, it takes them some time to learn the new way, or from left to right, and a few of them are always backsliding, or departing from the new way and vaguely seeking the old; and not finding this, they become vagabonds.

How much or how little sense or judgment our wild neighbors have is hard to determine. The crows and other birds that carry shell-fish high in the air and then let them drop upon the rocks to break the shell show something very much like reason, or a knowledge of the relation of cause and effect, though it is probably an unthinking habit formed in their ancestors under the pressure of hunger. Froude tells of some species of bird that he saw in South Africa flying amid the swarm of migrating locusts and clipping off the wings of the insects so that they would drop to the earth, where the birds could devour them at their leisure. Our squirrels will cut off the chestnut burs before they have opened, allowing them to fall to the ground, where, as they seem to know, the burs soon dry open. Feed a caged coon soiled food,—a piece of bread or meat rolled on the ground,—and before he eats it he will put it in his dish of water and wash it off. The author of "Wild Life Near Home" says that muskrats "will wash what they eat, whether washing is needed or not." If the coon washes his food only when it needs washing, and not in every individual instance, then the proceeding looks like an act of judgment; the same with the muskrat....