'Way Down East A Romance of New England Life 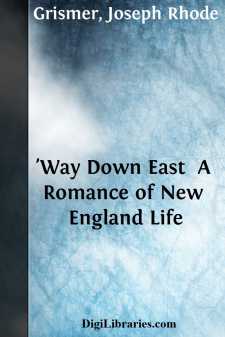 CHAPTER I. ALL HAIL TO THE CONQUERING HERO.

Methinks I feel this youth's perfections,With an invisible and subtle stealth,To creep in at mine eyes.—Shakespeare.

It had come at last, the day of days, for the two great American universities; Harvard and Yale were going to play their annual game of football and the railroad station of Springfield, Mass., momentarily became more and more thronged with eager partisans of both sides of the great athletic contest.

All the morning trains from New York, New Haven, Boston and the smaller towns had been pouring their loads into Springfield. Hampden Park was a sea of eager faces. The weather was fine and the waiting for the football game only added to the enjoyment—the appetizer before the feast.

The north side of the park was a crimson dotted mass full ten thousand strong; the south side showed the same goodly number blue-bespeckled, and equally confident. Little ripples of applause woke along the banks as the familiar faces of old "grads" loomed up, then melted into the vast throng. These, too, were men of international reputation who had won their spurs in the great battles of life, and yet, who came back year after year, to assist by applause in these mimic battles of their Alma Mater.

But the real inspiration to the contestants, were the softer, sweeter faces scattered among the more rugged ones like flowers growing among the grain—the smiles, the mantling glow of round young cheeks, the clapping of little hands—these were the things that made broken collarbones, scratched faces, and bruised limbs but so many honors to be contended for, votive offerings to be laid at the little feet of these fair ones.

Mrs. Standish Tremont's party occupied, as usual, a prominent place on the Harvard side. She was so great a factor in the social life at Cambridge that no function could have been a complete success without the stimulus of her presence. Personally, Mrs. Standish Tremont was one of those women who never grow old; one would no more have thought of hazarding a guess about her age than one would have made a similar calculation about the Goddess of Liberty. She was perennially young, perennially good-looking, and her entertainments were above reproach. Some sour old "Grannies" in Boston, who had neither her wit, nor her health, called her Venus Anno Domino, but they were jealous and cynical and their testimony cannot be taken as reliable.

What if she had been splitting gloves applauding college games since the fathers of to-day's contestants had fought and struggled for similar honors in this very field. She applauded with such vim, and she gave such delightful dinners afterward, that for the glory of old Harvard it is to be hoped she will continue to applaud and entertain the grandsons of to-day's victors, even as she had their sires.

It was said by the uncharitable that the secret of the lady's youth was the fact that she always surrounded herself with young people, their pleasure, interests, entertainments were hers; she never permitted herself to be identified with older people....