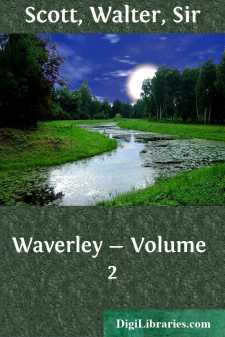 The dinner hour of Scotland Sixty Years Since was two o'clock. It was therefore about four o'clock of a delightful autumn afternoon that Mr. Gilfillan commenced his march, in hopes, although Stirling was eighteen miles distant, he might be able, by becoming a borrower of the night for an hour or two, to reach it that evening. He therefore put forth his strength, and marched stoutly along at the head of his followers, eyeing our hero from time to time, as if he longed to enter into controversy with him. At length, unable to resist the temptation, he slackened his pace till he was alongside of his prisoner's horse, and after marching a few steps in silence abreast of him, he suddenly asked—'Can ye say wha the carle was wi' the black coat and the mousted head, that was wi' the Laird of Cairnvreckan?'

'Presbyterian!' answered Gilfillan contemptuously; 'a wretched Erastian, or rather an obscure Prelatist, a favourer of the black indulgence, ane of thae dumb dogs that canna bark; they tell ower a clash o' terror and a clatter o' comfort in their sermons, without ony sense, or savour, or life. Ye've been fed in siccan a fauld, belike?'

'No; I am of the Church of England,' said Waverley.

'And they're just neighbour-like,' replied the Covenanter; 'and nae wonder they gree sae weel. Wha wad hae thought the goodly structure of the Kirk of Scotland, built up by our fathers in 1642, wad hae been defaced by carnal ends and the corruptions of the time;—ay, wha wad hae thought the carved work of the sanctuary would hae been sae soon cut down!'

To this lamentation, which one or two of the assistants chorussed with a deep groan, our hero thought it unnecessary to make any reply. Whereupon Mr. Gilfillan, resolving that he should be a hearer at least, if not a disputant, proceeded in his Jeremiade.

'And now is it wonderful, when, for lack of exercise anent the call to the service of the altar and the duty of the day, ministers fall into sinful compliances with patronage, and indemnities, and oaths, and bonds, and other corruptions,—is it wonderful, I say, that you, sir, and other sic-like unhappy persons, should labour to build up your auld Babel of iniquity, as in the bluidy persecuting saint-killing times? I trow, gin ye werena blinded wi' the graces and favours, and services and enjoyments, and employments and inheritances, of this wicked world, I could prove to you, by the Scripture, in what a filthy rag ye put your trust; and that your surplices, and your copes and vestments, are but cast-off garments of the muckle harlot that sitteth upon seven hills and drinketh of the cup of abomination. But, I trow, ye are deaf as adders upon that side of the head; ay, ye are deceived with her enchantments, and ye traffic with her merchandise, and ye are drunk with the cup of her fornication!'

How much longer this military theologist might have continued his invective, in which he spared nobody but the scattered remnant of HILL-FOLK, as he called them, is absolutely uncertain....