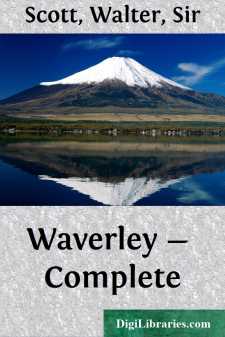 It has long been the ambition of the present publishers to offer to the public an ideal edition of the writings of Sir Walter Scott, the great poet and novelist of whom William Hazlitt said, 'His works are almost like a new edition of human nature.' Secure in the belief not only that his writings have achieved a permanent place in the literature of the world, but that succeeding generations will prize them still more highly, we have, after the most careful planning and study, undertaken the publication of this edition of the Waverley Novels and the complete poetical writings.

It is evident that the ideal edition of a great classic must be distinguished in typography, must present the best available text, and must be illustrated in such a way as at once to be beautiful in itself and to add to the reader's pleasure and his understanding of the book. As to the typography and text, little need be said here. The format of the edition has been most carefully studied, and represents the use of the best resources of The Riverside Press. The text has been carefully edited in the light of Scott's own revisions; all of his own latest notes have been included, glossaries have been added, and full descriptive notes to the illustrations have been prepared which will, we hope, add greatly to the reader's interest and instruction in the reading of the novels and poems.

Of the illustrations, which make the special feature of this edition, something more may be said. In the case of an author like Sir Walter Scott, the ideal edition requires that the beautiful and romantic scenery amid which he lived and of which he wrote shall be adequately presented to the reader. No other author ever used more charming backgrounds or employed them to better advantage. To see Scotland, and to visit in person all the scenes of the novels and poems, would enable the reader fully to understand these backgrounds and thereby add materially to his appreciation of the author.

Before beginning the preparation of this edition, the head of the department having it in charge made a visit in person to the scenes of the novels and poems, determined to explore all the localities referred to by the author, so far as they could be identified. The field proved even more productive than had been at first supposed, and photographs were obtained in sufficient quantity to illustrate all the volumes. These pictures represent the scenes very much as Scott saw them. The natural scenery— mountains, woods, lakes, rivers, seashore, and the like—is nearly the same as in his day. The ruins of ancient castles and abbeys were found to correspond very closely with his descriptions, though in many instances he had in imagination rebuilt these ruins and filled them with the children of his fancy. The scenes of the stories extend into nearly every county in Scotland and through a large part of England and Wales. All of these were thoroughly investigated, and photographs were made of everything of interest. One of the novels has to do with France and Belgium, one with Switzerland, one with the Holy Land, one with Constantinople, and one with India. For all of these lands, which Scott did not visit in person, and therefore did not describe with the same attention to detail as in the case of his own country, interesting pictures of characteristic scenery were secured. By this method the publishers have hoped to bring before the reader a series of photographs which will not only please the eye and give a satisfactory artistic effect to the volumes, but also increase the reader's knowledge of the country described and add a new charm to the delightful work of the author....