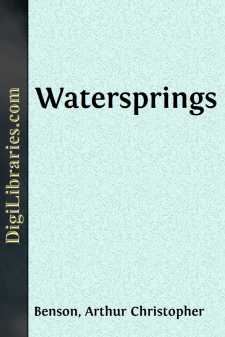 The bright pale February sunlight lay on the little court of Beaufort College, Cambridge, on the old dull-red smoke-stained brick, the stone mullions and mouldings, the Hall oriel, the ivied buttresses and battlements, the turrets, the tiled roofs, the quaint chimneys, and the lead-topped cupola over all. Half the court was in shadow. It was incredibly picturesque, but it had somehow the look of a fortress rather than of a house. It did not exist only to be beautiful, but had a well-worn beauty of age and use. There was no domestic adornment of flower-bed or garden-border, merely four squares of grass, looking like faded carpets laid on the rather uncompromising pebbles which floored the pathways. The golden hands of the clock pointed to a quarter to ten, and the chimes uttered their sharp, peremptory voices. Two or three young men stood talking at the vaulted gateway, and one or two figures in dilapidated gowns and caps, holding books, fled out of the court.

A firm footstep came down one of the stairways; a man of about forty passed out into the court—Howard Kennedy, Fellow and Classical Lecturer of the College. His thick curly brown hair showed a trace of grey, his short pointed beard was grizzled, his complexion sanguine, his eyebrows thick. There were little vague lines on his forehead, and his eyes were large and clear; an interesting, expressive face, not technically handsome, but both clever and good-natured. He was carelessly dressed in rather old but well-cut clothes, and had an air of business-like decisiveness which became him well, and made him seem comfortably at home in the place; he nodded and smiled to the undergraduates at the gate, who smiled back and saluted. He met a young man rushing down the court, and said to him, "That's right, hurry up! You'll just be in time," a remark which was answered by a gesture of despair from the young man. Then he went up the court towards the Hall, entered the flagged passage, looked for a moment at the notices on the screen, and went through into the back court, which was surrounded by a tiny cloister.

Here he met an elderly man, clean-shaven, fresh-coloured, acute-looking, who wore a little round bowler hat perched on a thick shock of white hair. He was dressed in a black coat and waistcoat, with a black tie, and wore rather light grey trousers. One would have taken him for an old-fashioned country solicitor. He was, as a matter of fact, the Vice-Master and Senior Fellow of the College—Mr. Redmayne, who had spent his whole life there. He greeted the younger man with a kindly, brisk, ironical manner, saying, "You look very virtuous, Kennedy! What are you up to?"

"I am going for a turn in the garden," said Howard; "will you come with me?"

"You are very good," said Mr. Redmayne; "it will be quite like a dialogue of Plato!"

They went down the cloister to a low door in the corner, which Howard unlocked, and turned into a small old-fashioned garden, surrounded on three sides by high walls, and overlooking the river on the fourth side; a gravel path ran all round; there were a few trees, bare and leafless, and a big bed of shrubs in the centre of the little lawn, just faintly pricked with points of green....