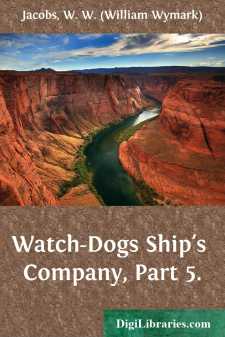 "It's a'most the only enj'yment I've got left," said the oldest inhabitant, taking a long, slow draught of beer, "that and a pipe o' baccy. Neither of 'em wants chewing, and that's a great thing when you ain't got anything worth speaking about left to chew with."

He put his mug on the table and, ignoring the stillness of the summer air, sheltered the flame of a match between his cupped hands and conveyed it with infinite care to the bowl of his pipe. A dull but crafty old eye squinting down the stem assured itself that the tobacco was well alight before the match was thrown away.

"As I was a-saying, kindness to animals is all very well," he said to the wayfarer who sat opposite him in the shade of the "Cauliflower" elms; "but kindness to your feller-creeturs is more. The pint wot you give me is gone, but I'm just as thankful to you as if it wasn't."

He half closed his eyes and, gazing on to the fields beyond, fell into a reverie so deep that he failed to observe the landlord come for his mug and return with it filled. A little start attested his surprise, and, to his great annoyance, upset a couple of tablespoonfuls of the precious liquid.

"Some people waste all their kindness on dumb animals," he remarked, after the landlord had withdrawn from his offended vision, "but I was never a believer in it. I mind some time ago when a gen'lemen from Lunnon wot 'ad more money than sense offered a prize for kindness to animals. I was the only one that didn't try for to win it.

"Mr. Bunnett 'is name was, and 'e come down and took Farmer Hall's 'ouse for the summer. Over sixty 'e was, and old enough to know better. He used to put saucers of milk all round the 'ouse for cats to drink, and, by the time pore Farmer Hall got back, every cat for three miles round 'ad got in the habit of coming round to the back-door and asking for milk as if it was their right. Farmer Hall poisoned a saucer o' milk at last, and then 'ad to pay five shillings for a thin black cat with a mangy tail and one eye that Bob Pretty said belonged to 'is children. Farmer Hall said he'd go to jail afore he'd pay, at fust, but arter five men 'ad spoke the truth and said they 'ad see Bob's youngsters tying a empty mustard-tin to its tail on'y the day afore, he gave way.

"Tha was Bob Pretty all over, that was; the biggest raskel Claybury 'as ever had; and it wasn't the fust bit o' money 'e made out o' Mr. Bunnett coming to the place.

"It all come through Mr. Bunnett's love for animals. I never see a man so fond of animals as 'e was, and if he had 'ad 'is way Claybury would 'ave been overrun by 'em by this time. The day arter 'e got to the farm he couldn't eat 'is breakfuss because of a pig that was being killed in the yard, and it was no good pointing out to 'im that the pig was on'y making a fuss about it because it was its nature so to do. He lived on wegetables and such like, and the way 'e carried on one day over 'arf a biled caterpillar 'e found in his cabbage wouldn't be believed....