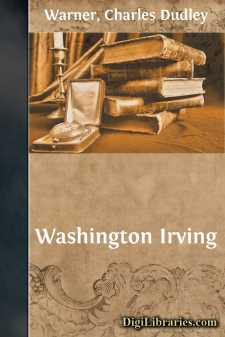 It is over twenty years since the death of Washington Irving removed that personal presence which is always a powerful, and sometimes the sole, stimulus to the sale of an author's books, and which strongly affects the contemporary judgment of their merits. It is nearly a century since his birth, which was almost coeval with that of the Republic, for it took place the year the British troops evacuated the city of New York, and only a few months before General Washington marched in at the head of the Continental army and took possession of the metropolis. For fifty years Irving charmed and instructed the American people, and was the author who held, on the whole, the first place in their affections. As he was the first to lift American literature into the popular respect of Europe, so for a long time he was the chief representative of the American name in the world of letters. During this period probably no citizen of the Republic, except the Father of his Country, had so wide a reputation as his namesake, Washington Irving.

It is time to inquire what basis this great reputation had in enduring qualities, what portion of it was due to local and favoring circumstances, and to make an impartial study of the author's literary rank and achievement.

The tenure of a literary reputation is the most uncertain and fluctuating of all. The popularity of an author seems to depend quite as much upon fashion or whim, as upon a change in taste or in literary form. Not only is contemporary judgment often at fault, but posterity is perpetually revising its opinion. We are accustomed to say that the final rank of an author is settled by the slow consensus of mankind in disregard of the critics; but the rank is after all determined by the few best minds of any given age, and the popular judgment has very little to do with it. Immediate popularity, or currency, is a nearly valueless criterion of merit. The settling of high rank even in the popular mind does not necessarily give currency; the so-called best authors are not those most widely read at any given time. Some who attain the position of classics are subject to variations in popular and even in scholarly favor or neglect. It happens to the princes of literature to encounter periods of varying duration when their names are revered and their books are not read. The growth, not to say the fluctuation, of Shakespeare's popularity is one of the curiosities of literary history. Worshiped by his contemporaries, apostrophized by Milton only fourteen years after his death as the "dear son of memory, great heir to fame,"—

"So sepulchred in such pomp dost lie,That kings, for such a tomb, would wish to die,"—

he was neglected by the succeeding age, the subject of violent extremes of opinion in the eighteenth century, and so lightly esteemed by some that Hume could doubt if he were a poet "capable of furnishing a proper entertainment to a refined and intelligent audience," and attribute to the rudeness of his "disproportioned and misshapen" genius the "reproach of barbarism" which the English nation had suffered from all its neighbors....