War Taxation Some Comments and Letters 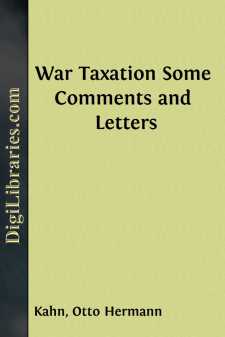 This is a reprint, somewhat amplified, of an article printed recently in the New York Times. The original article was written before the recommendations of the Ways and Means Committee of the House of Representatives were reported.

In a time of patriotic exaltation and of universal obligation and readiness to make great sacrifices to bring a most just and righteous war to a successful conclusion, the voice of sober argument and matter of fact considerations is apt to grate upon the ears of the people.

That voice is all the less likely to be popular when the arguments it puts forth may easily lend themselves to the interpretation of being actuated by solicitous care for selfish interests.

I am fully aware that by publishing the following observations I am exposing myself to that interpretation and to criticism of, and attack upon, my motives.

Yet, seeing that certain measures now under consideration threaten to take shape in a way which, from my practical business experience and after mature deliberation, I am bound to regard as faulty and as indeed harmful to the country, I believe it to be right and proper to contribute my views to the public discussion of the subject, for whatever they may be worth.

I can only hope, then, that in what I am going to say I shall be given credit for endeavoring to speak conscientiously and to the best of my knowledge and judgment from the point of view of the welfare of the entire country and not of the welfare merely of the well-to-do.

I shall address myself to the practical aspect and to a few phases only of the question and shall not attempt to enter into the economic theories and the broader and deeper considerations involved.

I shall assume in my argument that what Congress is seeking to accomplish is to impose taxes justly, effectively and scientifically with the desire to disturb the country's trade and commerce as little as possible and to avoid as much as may be the evils of financial dislocation.

I shall take it for granted that at a time when more than ever the unity of the country should be emphasized, sectional selfishness will find no place in the taxation program, and that, should it be attempted nevertheless, the congressional delegations of the States which would be unjustly affected, would resist, regardless of party affiliations, harmful discrimination against their constituents and their States.

I shall assume that it is not the purpose and intent of Congress, under the guise of the necessities of the war situation, to embrace the doctrines of Socialism.

Our present economic system, our present method of wealth distribution may or may not stand in need of change; the fact remains that Congress has no mandate to effect a fundamental change.

The consequence of such a change would be so immensely far-reaching that no government has the right to sanction steps to bring it about until the subject has been fully discussed before the people in all its bearings and the people have pronounced judgment through a Presidential or other election.

I will first state what in my opinion ought not to be done:

I take it that not many words need be used to expose the fallacy of the argument, heard even in the Halls of Congress: "If men are to be conscripted, wealth also must be conscripted."

Men will be conscripted to the extent that it is wise and just and needful....