War Poetry of the South 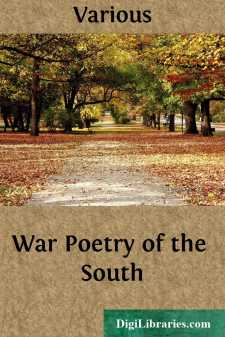 Several considerations have prompted the editor of this volume in the compilation of its pages. It constitutes a contribution to the national literature which is assumed to be not unworthy of it, and which is otherwise valuable as illustrating the degree of mental and art development which has been made, in a large section of the country, under circumstances greatly calculated to stimulate talent and provoke expression, through the higher utterances of passion and imagination. Though sectional in its character, and indicative of a temper and a feeling which were in conflict with nationality, yet, now that the States of the Union have been resolved into one nation, this collection is essentially as much the property of the whole as are the captured cannon which were employed against it during the progress of the late war. It belongs to the national literature, and will hereafter be regarded as constituting a proper part of it, just as legitimately to be recognized by the nation as are the rival ballads of the cavaliers and roundheads, by the English, in the great civil conflict of their country.

The emotional literature of a people is as necessary to the philosophical historian as the mere details of events in the progress of a nation. This is essential to the reputation of the Southern people, as illustrating their feelings, sentiments, ideas, and opinions--the motives which influenced their actions, and the objects which they had in contemplation, and which seemed to them to justify the struggle in which they were engaged. It shows with what spirit the popular mind regarded the course of events, whether favorable or adverse; and, in this aspect, it is even of more importance to the writer of history than any mere chronicle of facts. The mere facts in a history do not always, or often, indicate the true animus, of the action. But, in poetry and song, the emotional nature is apt to declare itself without reserve--speaking out with a passion which disdains subterfuge, and through media of imagination and fancy, which are not only without reserve, but which are too coercive in their own nature, too arbitrary in their influence, to acknowledge any restraints upon that expression, which glows or weeps with emotions that gush freely and freshly from the heart. With this persuasion, we can also forgive the muse who, in her fervor, is sometimes forgetful of her art.

And yet, it is believed that the numerous pieces of this volume will be found creditable to the genius and culture of the Southern people, and honorable, as in accordance with their convictions. They are derived from all the States of the late Southern Confederacy, and will be found truthfully to exhibit the sentiment and opinion prevailing more or less generally throughout the whole. The editor has had special advantages in making the compilation. Having a large correspondence in most of the Southern States, he has found no difficulty in procuring his material. Contributions have poured in upon him from all portions of the South; the original publications having been, in a large number of cases, subjected to the careful revision of the several authors. It is a matter of great regret with him that the limits of the present volume have not suffered him to do justice to, and find a place for, many of the pieces which fully deserve to be put on record. Some of the poems were quite too long for his purpose; a large number, delayed by the mails and other causes, were received too late for publication. Several collections, from Louisiana, North Carolina, and Texas, especially, are omitted for this reason. Many of these pieces are distinguished by fire, force, passion, and a free play of fancy. Briefly, his material would enable him to prepare another volume, similar to the present, which would not be unworthy of its companionship. He is authorized by his publisher to say that, in the event of the popular success of the present volume, he will cheerfully follow up its publication by a second, of like style, character, and dimensions.

The editor has seen with pleasure the volume of "Rebel Rhymes" edited by Mr....