War Letters of a Public-School Boy 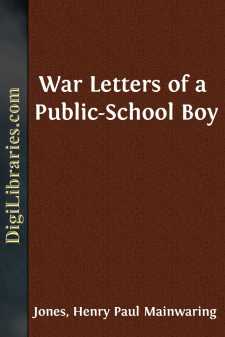 These laid the world away; poured out the redSweet wine of youth; gave up the years to beOf work and joy ...And those who would have been,Their sons, they gave, their immortality.

In deciding to publish some of the letters written by the late Lieutenant H. P. M. Jones during his twenty-seven months' service with the British Army, accompanying them with a memoir, I was actuated by a desire, first, to enshrine the memory of a singularly noble and attractive personality; secondly, to describe a career which, though tragically cut short, was yet rich in honourable achievement; thirdly, to show the influence of the Great War on the mind of a public-school boy of high intellectual gifts and sensitive honour, who had shone with equal lustre as a scholar and as an athlete.

My choice of the title of this book was determined by the frequent allusions made by my son in his war letters to his old school. He spent six and a half years at Dulwich College. His career there was gloriously happy and very distinguished. On the scholastic side, it culminated in December, 1914, in the winning of a scholarship in History and Modern Languages at Balliol College, Oxford; on the athletic side, in his carrying off four silver cups at the Athletic Sports in March, 1915, and tieing for the "Victor Ludorum" shield.

As a merry, light-hearted boy in his early years at Dulwich, his love for the College was marked. It waxed with every term he spent within its walls. After he left it, that love became a passion, sustained, coloured and glorified by happy memories. Everybody and everything connected with it shared in his glowing affection. Its welfare and reputation were infinitely precious to him. Like a leitmotif in a musical composition, this love of Dulwich College recurs again and again in his war letters. Every honour won by a Dulwich boy on the battlefield, in scholarship or in athletics gave him exquisite pleasure. The very last letter he wrote is irradiated with love of the old school. When he joined the Tank Corps, stripping, as it were, for the deadly combat, he sent to the depôt at Boulogne all his impedimenta. But among the few cherished personal possessions that he took with him into the zone of death were two photographs—one of the College buildings, the other of the Playing Fields, this latter depicting the cricket matches on Founder's Day. In death as in life Dulwich was close to his heart.

Paul Jones was a young man of herculean strength—tall, muscular, deep-chested and broad-shouldered. But he had one grave physical defect. He was extremely short-sighted, had worn spectacles habitually from his sixth year and was almost helpless without them. In fact, his vision was not one-twelfth of normal. Much to his chagrin, his myopia excluded him from the Infantry which he tried to enter in the spring of 1915, and he had to put up with a Commission as a subaltern in the Army Service Corps. His first three months in the Army were spent at a home port, one of the chief depôts of supply for the British Army in the field....