War Brides: A Play in One Act 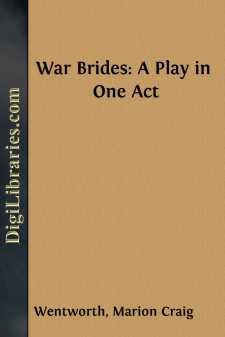 The war brides were cheered with enthusiasm and the churches were crowded when the wedding parties spoke the ceremony in concert.—PRESS CLIPPING.

SCENE: A room in a peasant's cottage in a war-ridden country. A large fireplace at the right. Near it a high-backed settle. On the left a heavy oak table and benches. Woven mats on the floor. A door at left leads into a bedroom. In the corner a cupboard. At the back a wide window with scarlet geraniums and an open door. A few firearms are stacked near the fireplace. There is an air of homely color and neatness about the room.

Through the open door may be seen women stacking grain. Others go by carrying huge baskets of grapes or loads of wood, and gradually it penetrates the mind that all these workers are women, aristocrats and peasants side by side. Now and then a bugle blows or a drum beats in the distance. A squad of soldiers marches quickly by. There is everywhere the tense atmosphere of unusual circumstance, the anxiety and excitement of war.

Amelia, a slight, flaxen-haired girl of nineteen, comes in. She brushes off the hay with which she is covered, and goes to packing a bag with a secret, but determined, air. The Mother passes the window and appears in the doorway. She is old and work-worn, but sturdy and stoical. Now she carries a heavy load of wood, and is weary. She casts a sharp eye at Amelia.

What are you doing, girl? [Amelia starts and puts the bag in the cupboard.] Who's going away? They haven't sent for Arno?

Mother: [Sighs, and drops her load on the hearth.]

Is the hay all in?

Yes. I put in the last load. All the big work on our place is done, and so—[Looks at her mother and hesitates. Her mother begins to chop the wood into kindling.] I'll do that, Mother.

Let be, girl. It keeps me from worrying. Get a bite to eat. What were you doing with that bag? Who were you packing it for?

Sit down, Mother, and be still while I tell you—

[Pushes her mother into a chair.]

Is there any news? Quick! Tell me!

Not since yesterday. Only they say Franz is at the front. We don't know where Emil and Otto are, and there's been a battle; but—

My boys! my boys!

Don't, Mother! They may come back. [A cheer is heard.]

Amelia: [Running to the door and looking out.]

They are cheering the war brides, that's all.

Aye. There's been another wedding ceremony.

How many war brides to-day?

Aye, that is good. Has any one asked you, Amelia? [Amelia looks embarrassed.] Some one should ask you. You are a good-looking girl.

The young and handsome lieutenant? You are lucky. You said yes?

I hardly know him. I've only spoken to him once before....