War and the future: Italy, France and Britain at war 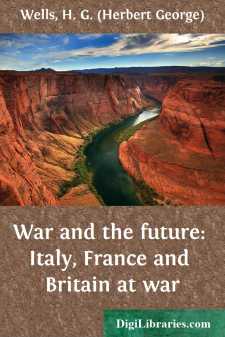 I. THE ISONZO FRONT 1

My first impressions of the Italian war centre upon Udine. So far I had had only a visit to Soissons on an exceptionally quiet day and the sound of a Zeppelin one night in Essex for all my experience of actual warfare. But my bedroom at the British mission in Udine roused perhaps extravagant expectations. There were holes in the plaster ceiling and wall, betraying splintered laths, holes, that had been caused by a bomb that had burst and killed several people in the little square outside. Such excitements seem to be things of the past now in Udine. Udine keeps itself dark nowadays, and the Austrian sea-planes, which come raiding the Italian coast country at night very much in the same aimless, casually malignant way in which the Zeppelins raid England, apparently because there is nothing else for them to do, find it easier to locate Venice.

My earlier rides in Venetia began always with the level roads of the plain, roads frequently edged by watercourses, with plentiful willows beside the road, vines and fields of Indian corn and suchlike lush crops. Always quite soon one came to some old Austrian boundary posts; almost everywhere the Italians are fighting upon what is technically enemy territory, but nowhere does it seem a whit less Italian than the plain of Lombardy. When at last I motored away from Udine to the northern mountain front I passed through Campo-Formio and saw the white-faced inn at which Napoleon dismembered the ancient republic of Venice and bartered away this essential part of Italy into foreign control. It just gravitates back now—as though there had been no Napoleon.

And upon the roads and beside them was the enormous equipment of a modern army advancing. Everywhere I saw new roads being made, railways pushed up, vast store dumps, hospitals; everywhere the villages swarmed with grey soldiers; everywhere our automobile was threading its way and taking astonishing risks among interminable processions of motor lorries, strings of ambulances or of mule carts, waggons with timber, waggons with wire, waggons with men's gear, waggons with casks, waggons discreetly veiled, columns of infantry, cavalry, batteries en route. Every waggon that goes up full comes back empty, and many wounded were coming down and prisoners and troops returning to rest. Goritzia had been taken a week or so before my arrival; the Isonzo had been crossed and the Austrians driven back across the Carso for several miles; all the resources of Italy seemed to be crowding up to make good these gains and gather strength for the next thrust. The roads under all this traffic remained wonderful; gangs of men were everywhere repairing the first onset of wear, and Italy is the most fortunate land in the world for road metal; her mountains are solid road metal, and in this Venetian plain you need but to scrape through a yard of soil to find gravel.

One travelled through a choking dust under the blue sky, and above the steady incessant dusty succession of lorry, lorry, lorry, lorry that passed one by, one saw, looking up, the tree tops, house roofs, or the solid Venetian campanile of this or that wayside village....