Waltoniana Inedited Remains in Verse and Prose of Izaak Walton 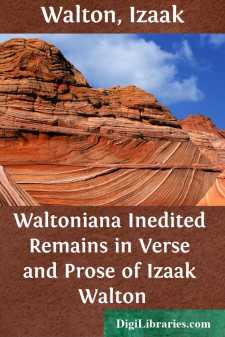 Few men who have written books have been able to win so large a share of the personal affection of their readers as honest Izaak Walton has done, and few books are laid down with so genuine a feeling of regret as the "Complete Angler" certainly is, that they are no longer. "One of the gentlest and tenderest spirits of the seventeenth century," we all know his dear old face, with its cheerful, happy, serene look, and we should all have liked to accompany him on one of those angling excursions from Tottenham High Cross, and to have listened to the quaint, garrulous, sportive talk, the outcome of a religion which was like his homely garb, not too good for every-day wear. We see him, now diligent in his business, now commemorating the virtues of that cluster of scholars and churchmen with whose friendship he was favoured in youth, and teaching his young brother-in-law, Thomas Ken, to walk in their saintly footsteps,—now busy with his rod and line, or walking and talking with a friend, staying now and then to quaff an honest glass at a wayside ale-house—leading a simple, cheerful, blameless life

"Thro' near a century of pleasant years."[1]

We have said that the reader regrets that Walton should have left so little behind him: his "Angler" and his Lives are all that is known to most. But we are now enabled to present those who love his memory with a collection of fugitive pieces, in verse and prose, extending in date of composition over a period of fifty years,—beginning with the Elegy on Donne, in 1633, and terminating only with his death in 1683. All these, however unambitious, are more or less characteristic of the man, and impregnated with the same spirit of genial piety that distinguishes the two well-known books to which they form a supplement.

Walton's devotion to literature must have begun at an early age; for in a little poem, entitled The Love of Amos and Laura, published in 1619, when he was only twenty-six, and attributed variously to Samuel Purchas, author of "The Pilgrims," and to Samuel Page, we find the following dedication to him:—

"TO MY APPROVED AND MUCH RESPECTED FRIEND, IZ. WA.

"To thee, thou more then thrice beloved friend,    I too unworthy of so great a blisse:    These harsh-tun'd lines I here to thee commend,    Thou being cause it is now as it is:      For hadst thou held thy tongue, by silence might      These have beene buried in obliuious night.

"If they were pleasing, I would call them thine,    And disauow my title to the verse:    But being bad, I needes must call them mine.    No ill thing can be cloathed in thy verse.      Accept them then, and where I have offended,      Rase thou it out, and let it be amended.

What poems Walton wrote in his youth, we have now no means of knowing; it has not been discovered that any have been printed, unless we adopt the theory advocated by Mr. Singer,[3] and by a writer in the "Retrospective Review,"[4] that the poem of Thealma and Clearchus, which he published in the last year of his life, as a posthumous fragment of his relation John Chalkhill, was really a juvenile work of his own....