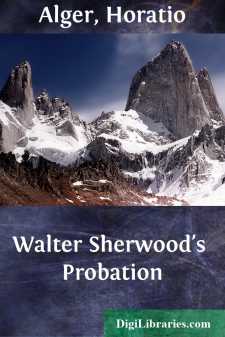 "Here's a letter for you, Doctor Mack," said the housekeeper, as she entered the plain room used as a library and sitting-room by her employer, Doctor Ezekiel Mack. "It's from Walter, I surmise." This was a favorite word with Miss Nancy Sprague, who, though a housekeeper, prided herself on having been a schoolmistress in her earlier days.

"Indeed, Nancy. Let me see it. Walter is really getting attentive. His last letter came to hand only two days since. He hasn't forgotten his old guardian."

"Oh, no, sir. He'll never do that. He has a predilection for his old home. His heart is in the right place."

"Just so. I wish I felt as sure about his head."

Doctor Mack adjusted his spectacles, for he was rising sixty, and his eyes required assistance, and opened the letter. As he read it his forehead contracted, and he looked disturbed. A perusal of the letter may help us to understand why. It ran as follows:

"DEAR GUARDIAN: You will be surprised at hearing from me so soon again, but I am really forced to write. I find college life much more expensive than I supposed it would be. A fellow is expected to join two or three societies, and each costs money. I know you wouldn't have me appear mean. Then the students have been asked to contribute to a fund for the enlargement of the library, and almost every day there is a demand for money for one object or another. As it is nearly the end of the term, I calculate that with a check for an extra hundred dollars I can get along. I am awfully sorry to ask for it, but it will come out of the money father left me, and I am sure he would wish me to keep up appearances, and not fall behind the rest of the boys.

"I stand fairly well in my studies, and I expect to be stroke oar of the college boat club. Besides this, I have been elected catcher of the college baseball club. I am thought to excel in athletic sports, and really enjoy my college life very much. Please send me the check by return of mail. Affectionately yours, WALTER."

Doctor Mack laid the letter on the table, and slowly removed the glasses from his nose.

"One hundred dollars!" he repeated. "That is the second extra check he has written for, this term. Then his regular term bills will come due in two weeks. He is spending more than three times as much as I did when in college. Forty years have made a difference, no doubt, but not so great a difference as that. I hope the boy isn't falling into extravagant habits. I care for that more than for the money. His father left a good fortune, of which fact he is unfortunately aware, but I don't mean that it shall spoil him. Now, what shall I do. Shall I send him the check or not?"

Doctor Mack leaned back in his chair, and thought busily. He felt anxious about his ward, who had entered college early and was now only seventeen. Walter Sherwood was a boy of excellent talent and popular manners, but he was inclined to be self-indulgent and had a large capacity for "enjoyment." His guardian had fondly hoped that he would lead the class in scholarship, but instead of this he was only doing "fairly well" in his studies....