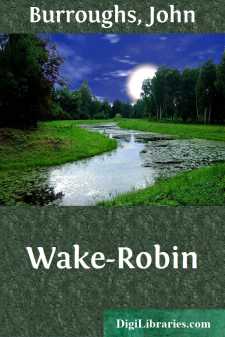 In coming before the public with a newly made edition of my writings, what can I say to my reader at this stage of our acquaintance that will lead to a better understanding between us? Probably nothing. We understand each other very well already. I have offered myself as his guide to certain matters out of doors, and to a few matters indoor, and he has accepted me upon my own terms, and has, on the whole been better pleased with me than I had any reason to expect. For this I am duly grateful; why say more? Yet now that I am upon my feet, so as to speak, and palaver is the order, I will keep on a few minutes longer.

It is now nearly a quarter of a century since my first book, "Wake-Robin," was published. I have lived nearly as many years in the world as I had lived when I wrote its principal chapters. Other volumes have followed, and still others. When asked how many there are, I often have to stop and count them up. I suppose the mother of a large family does not have to count up her children to say how many there are. She sees their faces all before her. It is said of certain savage tribes who cannot count above five, and yet who own flocks and herds, that every native knows when he has got all his own cattle, not by counting, but by remembering each one individually.

The savage is with his herds daily; the mother has the love of her children constantly in her heart; but when one's book goes forth from him, in a sense it never returns. It is like the fruit detached from the bough. And yet to sit down and talk of one's books as a father might talk of his sons, who had left his roof and gone forth to make their own way in the world, is not an easy matter. The author's relation to his book is a little more direct and personal, after all, more a matter of will and choice, than a father's relation to his child. The book does not change, and, whatever it fortunes, it remains to the end what its author made it. The son is an evolution out of a long line of ancestry, and one's responsibility of this or that trait is often very slight; but the book is an actual transcript of his mind, and is wise or foolish according as he made it so. Hence I trust my reader will pardon me if I shrink from any discussion of the merits or demerits of these intellectual children of mine, or indulge in any very confidential remarks with regard to them.

I cannot bring myself to think of my books as "works," because so little "work" has gone to the making of them. It has all been play. I have gone a-fishing, or camping, or canoeing, and new literary material has been the result. My corn has grown while I loitered or slept. The writing of the book was only a second and finer enjoyment of my holiday in the fields or woods. Not till the writing did it really seem to strike in and become part of me.

A friend of mine, now an old man, who spent his youth in the woods of northern Ohio, and who has written many books, says, "I never thought of writing a book, till my self-exile, and then only to reproduce my old-time life to myself." The writing probably cured or alleviated a sort of homesickness. Such is a great measure has been my own case. My first book, "Wake-Robin," was written while I was a government clerk in Washington. It enabled me to live over again the days I had passed with the birds and in the scenes of my youth. I wrote the book sitting at a desk in front of an iron wall. I was the keeper of a vault in which many millions of bank-notes were stored. During my long periods of leisure I took refuge in my pen. How my mind reacted from the iron wall in front of me, and sought solace in memories of the birds and of summer fields and woods!...