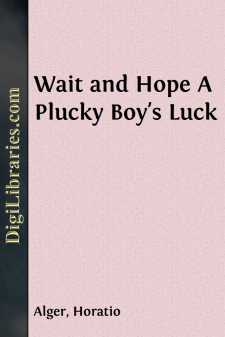 Ben and His Aunt

Five o'clock sounded from the church clock, and straightway the streets of Milltown were filled with men, women, and children issuing from the great brick factories huddled together at one end of the town. Among these, two boys waked in company, James Watson and Ben Bradford. They were very nearly of an age, James having just passed his fifteenth birthday, and Ben having nearly attained it.

Both boys looked sober. Why, will appear from their conversation.

"It's rather hard to get out of a job just now," said James."Why couldn't the superintendent discharge somebody else?"

"I suppose it's all right," said Ben. "We were taken on last, and we haven't as much claim to remain as those that have been in the mill longer."

"I don't believe there was any need of discharging anybody," complained James.

"You know business is very dull," said Ben, who was more considerate, "and I hear they have been losing money."

"So can you," said Ben. "Your father is pretty well off, and you won't suffer."

"Oh, I shall have enough to eat, and so on; but I shan't have any spending money, and I can't get a new suit, as I expected to this fall."

"I wish that was all I had to fear," said Ben; "but you know how it is with me. I don't see how Aunt Jane is going to get along without my earnings."

"Oh, you'll get along somehow," said James carelessly, for he did not care enough about other people's prospects to discuss them.

"Yes, I guess so," said Ben, more cheerfully. "There's no use in worrying. Wait and Hope—that's my motto."

"You have to wait a thundering long time sometimes," said James. "Well, good night. Come round and see me to-morrow. You'll have plenty of time."

"I don't know about that. I must look up something to do."

"I shan't. I am going to wait till the superintendent takes me on again. There's one comfort. I can lie abed as long as I want to. I won't be tied to the factory bell."

The house which James entered was a good-sized two-story house, with an ample yard, and a garden behind it. His father kept a dry-goods store in Milltown, and was generally considered well-to-do. James entered the mill, not because he was obliged to, but because he wanted to have a supply of money in his pocket. His father allowed him to retain all of his wages, requiring him only to purchase his own clothes. As he was paid five dollars a week, James was able to clothe himself with half his income, and reserve the rest for spending-money. He was very fond of amusements, and there was no circus, concert, or other entertainment in Milltown which he did not patronize.

Ben kept on his way, till he reached the small house where his aunt lived, and which had been his own home ever since his parents died, when he was but five years of age. Two years before, Mr. Reuben Bradford, his uncle, died, and since then the family had been supported chiefly by Ben's wages in the mill. His aunt got some sewing to do, but her earnings were comparatively small....