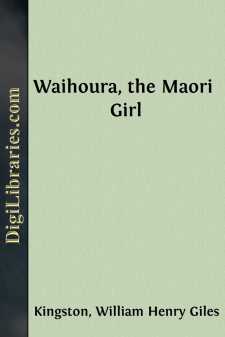 The New Colony. Arrival of the families of Mr Pemberton, Farmer Greening and others, in New Zealand.—Inspect Land.—Encamp near the Port till they can settle on the Land they have selected.

A fine emigrant ship, her voyage happily terminated, had just entered her destined port in the northern island of New Zealand. Her anchor was dropped, the crew were aloft furling sails, and several boats were alongside ready to convey the passengers to the shore. All was bustle and excitement on board, each person anxious to secure his own property,—and people were running backwards and forwards into the cabins, to bring away any minor articles which might have been forgotten.

The water was calm and bright, the sky intensely blue. On either hand were bold picturesque headlands running out into the sea, fringed by dark rocks, while beyond the sandy beach, which bordered the bay, on a partially cleared space, were seen numerous cottages, interspersed with tents and huts, many of the latter rudely constructed of boughs. Further off arose forests of tall trees, reaching to the base, and climbing the sides of a range of high mountains, here and there broken by deep ravines, with sparkling streams rushing down them, finding their way into a broad river which flowed into the bay. Beyond the first range appeared others—range beyond range, the summits of several towering to the sky, covered with mantles of snow shining with dazzling whiteness in the bright rays of the sun. In several places the forest gave way to wide open tracts, clothed with fern or tall waving grass.

“Here we are safe at last,” exclaimed Valentine Pemberton, a young gentleman about eighteen, as he stepped from one of the first boats on to the ledge of rocks which formed the chief landing-place of the settlement.

“Father, let me help you,” he added, extending his arm towards a middle-aged fine-looking man who followed him.

“Now, Lucy, take my hand; the rocks are somewhat slippery. Harry, you can look out for yourself.” He addressed his young sister, a fair sweet-looking girl of about fifteen, and his brother, a fine active boy, who sprang on to the rock after him.

“Take care of Betsy, though,” said Lucy, not forgetful of her faithful maid, whose attachment to her young mistress had induced to leave home for a strange land.

Mr Pemberton, with his daughter and two sons, soon made their way to the more even beach, followed by Betsy and Paul Greening. Paul’s father, farmer Greening, a sturdy English yeoman, with his wife and two younger sons, James and little Tobias, as the latter was called, though as big as his brothers, were the next to land.

“My boys and I will look after your things, Mr Pemberton,” shouted the farmer. “Do you go and find lodgings for Miss Lucy and Betsy.”

“Thank you, my friend,” said Mr Pemberton, “but we have made up our mind to rough it, and purpose camping out under tents until we can get a roof of our own over our heads. Before we begin work, however, I wish to return thanks to Him who has guided and protected us during our voyage across the ocean....