Voyages in Search of the North-West Passage 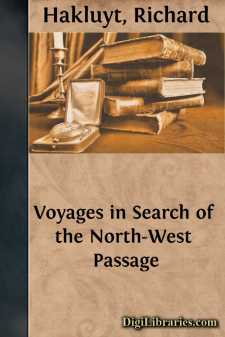 it was a Phantom Ship that made some voyages to different parts of the world which were recorded in early numbers of Charles Dickens’s “Household Words.”  As preface to Richard Hakluyt’s records of the first endeavour of our bold Elizabethan mariners to find North-West Passage to the East, let me repeat here that old voyage of mine from No. 55 of “Household Words,” dated the 12th of April, 1851: The Phantom is fitted out for Arctic exploration, with instructions to find her way, by the north-west, to Behring Straits, and take the South Pole on her passage home.  Just now we steer due north, and yonder is the coast of Norway.  From that coast parted Hugh Willoughby, three hundred years ago; the first of our countrymen who wrought an ice-bound highway to Cathay.  Two years afterwards his ships were found, in the haven of Arzina, in Lapland, by some Russian fishermen; near and about them Willoughby and his companions—seventy dead men.  The ships were freighted with their frozen crews, and sailed for England; but, “being unstaunch, as it is supposed, by their two years’ wintering in Lapland, sunk, by the way, with their dead, and them also that brought them.”

Ice floats about us now, and here is a whale blowing; a whale, too, very near Spitzbergen.  When first Spitzbergen was discovered, in the good old times, there were whales here in abundance; then a hundred Dutch ships, in a crowd, might go to work, and boats might jostle with each other, and the only thing deficient would be stowage room for all the produce of the fishery.  Now one ship may have the whole field to itself, and travel home with an imperfect cargo.  It was fine fun in the good old times; there was no need to cruise.  Coppers and boilers were fitted on the island, and little colonies about them, in the fishing season, had nothing to do but tow the whales in, with a boat, as fast as they were wanted by the copper.  No wonder that so enviable a Tom Tidler’s ground was claimed by all who had a love for gold and silver.  The English called it theirs, for they first fished; the Dutch said, nay, but the island was of their discovery; Danes, Hamburghers, Bisayans, Spaniards, and French put in their claims; and at length it was agreed to make partitions.  The numerous bays and harbours which indent the coast were divided among the rival nations; and, to this day, many of them bear, accordingly, such names as English Bay, Danes Bay, and so forth.  One bay there is, with graves in it, named Sorrow.  For it seemed to the fishers most desirable, if possible, to plant upon this island permanent establishments, and condemned convicts were offered, by the Russians, life and pardon, if they would winter in Spitzbergen.  They agreed; but, when they saw the icy mountains and the stormy sea, repented, and went back, to meet a death exempt from torture.  The Dutch tempted free men, by high rewards, to try the dangerous experiment.  One of their victims left a journal, which describes his suffering and that of his companions.  Their mouths, he says, became so sore that, if they had food, they could not eat; their limbs were swollen and disabled with excruciating pain; they died of scurvy.  Those who died first were coffined by their dying friends; a row of coffins was found, in the spring, each with a man in it; two men uncoffined, side by side, were dead upon the floor.  The journal told how once the traces of a bear excited their hope of fresh meat and amended health; how, with a lantern, two or three had limped upon the track, until the light became extinguished, and they came back in despair to die.  We might speak, also, of eight English sailors, left, by accident, upon Spitzbergen, who lived to return and tell their winter’s tale; but a long journey is before us and we must not linger on the way.  As for our whalers, it need scarcely be related that the multitude of whales diminished as the slaughtering went on, until it was no longer possible to keep the coppers full.  The whales had to be searched for by the vessels, and thereafter it was not worth while to take the blubber to Spitzbergen to be boiled; and the different nations, having carried home their coppers, left the apparatus of those fishing stations to decay....