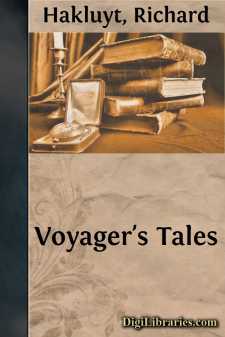 Richard Hakluyt, notwithstanding the Dutch look of his name, was of a good British stock, from Wales or the Welsh borders. At the beginning of the fourteenth century an ancestor of his, Hugo Hakelute, sat in Parliament as member for Leominster.

Richard Hakluyt, born about five years before the accession of Queen Elizabeth, was a boy at Westminster School, when visits to a cousin in the Middle Temple, also a Richard Hakluyt, first planted in him an enthusiasm for the study of adventure towards a wider use and knowledge of the globe we live upon. As a student at Christ Church, Oxford, all his leisure was spent on the collection and reading of accounts of voyage and adventure. He graduated as B. A. in 1574, as M. A. in 1577, and lectured publicly upon geography, showing "both the old imperfectly composed, and the new lately reformed maps, globes, spheres, and other instruments of this art."

In 1582 Hakluyt, at the age of about twenty-nine, issued his first publication: "Divers Voyages touching the Discovery of America and the Lands adjacent unto the same, made first of all by our Englishmen, and afterwards by the Frenchmen and Bretons: and certain Notes of Advertisements for Observations, necessary for such as shall hereafter make the like Attempt." His researches had already made him the personal friend of the famous sea captains of Elizabeth's reign. In 1583 he had taken orders, and went to Paris as chaplain to the English ambassador, Sir Edward Stafford. From Paris he returned to England for a short time, in 1584, and laid before the Queen a paper recommending the plantation of unsettled parts of America. It was called "A particular Discourse concerning Western Discoveries, written in the year 1584, by Richard Hakluyt, of Oxford, at the request and direction of the right worshipful Mr. Walter Raleigh, before the coming home of his two barks." Raleigh and Hakluyt were within a year of the same age.

To found a colonial empire in America by settling upon new lands, and by dispossessing Spaniards, was one of the grand ideas of Walter Raleigh, who obtained, on the 25th of March in that year, 1584, a patent authorising him to search out and take possession of new lands in the Western world. He then fitted out two ships, which left England on the 27th of April, under the command of Philip Amadas and Arthur Barlow. In June they had reached the West Indies, then they sailed north by the coasts of Florida and Carolina, and they had with them two natives when they returned to England in September, 1584. In December Raleigh's patent was enlarged and confirmed, and presently afterwards Raleigh was knighted.

Richard Hakluyt's paper, in aid of this beginning of the shaping of another England in the New World, was for a long time lost. It was first printed in 1877 at Cambridge, Massachusetts, among the Collections of the Maine Historical Society. It won for its author a promise of the next vacant prebend at Bristol; the vacancy came about a year later, and the Rev. Richard Hakluyt was admitted to it in 1586.

Hakluyt remained about five years at Paris as Chaplain to the English Embassy, and while there he caused the publication in 1586 of an account by Laudonniere of voyages into Florida. This he also translated and published, in London, in 1587, as "A Notable History containing Four Voyages made by certain French Captains into Florida." In 1588 Hakluyt returned to England, and in the next year, 1589, he published in one folio volume, "The Principal Navigations, Voyages, and Discoveries of the English Nation." In April of the next year he became rector of Witheringsett-cum-Brockford, in Suffolk....