Voyage of the Paper Canoe; a geographical journey of 2500 miles, from Quebec to the Gulf of Mexico, during the years 1874-5 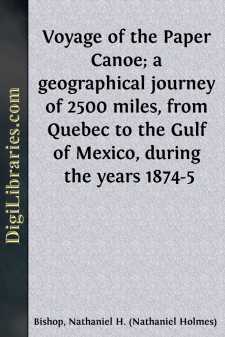 On Saturday morning, December 5, I left the pier of the Old Dominion Steamship Company, at Norfolk, Virginia, and, rowing across the water towards Portsmouth, commenced ascending Elizabeth River, which is here wide and affected by tidal change. The old navy yard, with its dismantled hulks lying at anchor in the stream, occupies both banks of the river. About six miles from Norfolk the entrance to the Dismal Swamp Canal is reached, on the left bank of the river. This old canal runs through the Great Dismal Swamp, and affords passage for steamers and light-draught vessels to Elizabeth City, on the Pasquotank River, which empties into Albemarle Sound to the southward. The great cypress and juniper timber is penetrated by this canal, and schooners are towed into the swamp to landings where their cargoes are delivered.

In the interior of the Dismal Swamp is Drummond's Lake, named after its discoverer. It is seven miles long by five miles wide, and is the feeder of the canal. A branch canal connects it with the main canal; and small vessels may traverse the lake in search of timber and shingles. Voyagers tell me that during heavy gales of wind a terrible sea is set in motion upon this shoal sheet of water, making it dangerous to navigate. Bears are found in the fastnesses of the swamp. The Dismal Swamp Canal was dug in the old days of the wheelbarrow and spade.

The Albemarle and Chesapeake Canal, the entrance to which is sixteen miles from Norfolk, on the right or east bank of the Elizabeth River, and generally known as the "new canal," was commenced about the year 1856, and finished in 1859. It is eight miles and a half in length, and connects the Elizabeth and North Landing rivers. This canal was dug by dredging-machines. It is kept in a much better state for navigation, so far as the depth of water is concerned, than the old canal, which from inattention is gradually shoaling in places; consequently the regular steam-packets which ply between Elizabeth City and Norfolk, as well as steamers whose destinations are further north, have given up the use of the Dismal Swamp Canal, and now go round through Albemarle Sound up the North River, thence by a six-mile cut into Currituck Sound, up North Landing River, and through the new canal to the Elizabeth River and into Chesapeake Bay. The shores of the Elizabeth are low and are fringed by sedgy marshes, while forests of second-growth pine present a green background to the eye. A few miles above Norfolk the cultivation of land ceases, and the canoeist traverses a wilderness.

About noon I arrived at the locks of the Albemarle and Chesapeake Canal. The telegraph operator greeted me with the news that the company's agent in Norfolk had telegraphed to the lock-master to pass the paper canoe through with the freedom of the canal — the first honor of the kind that had fallen to my lot....