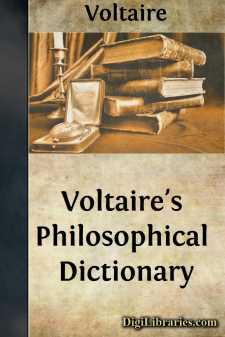 ADULTERY Note on a Magistrate Written about 1764

A senior magistrate of a French town had the misfortune to have a wife who was debauched by a priest before her marriage, and who since covered herself with disgrace by public scandals: he was so moderate as to leave her without noise. This man, about forty years old, vigorous and of agreeable appearance, needs a woman; he is too scrupulous to seek to seduce another man's wife, he fears intercourse with a public woman or with a widow who would serve him as concubine. In this disquieting and sad state, he addresses to his Church a plea of which the following is a précis:

My wife is criminal, and it is I who am punished. Another woman is necessary as a comfort to my life, to my virtue even; and the sect of which I am a member refuses her to me; it forbids me to marry an honest girl. The civil laws of to-day, unfortunately founded on canon law, deprive me of the rights of humanity. The Church reduces me to seeking either the pleasures it reproves, or the shameful compensations it condemns; it tries to force me to be criminal.

I cast my eyes over all the peoples of the earth; there is not a single one except the Roman Catholic people among whom divorce and a new marriage are not natural rights.

What upheaval of the rule has therefore made among the Catholics a virtue of undergoing adultery, and a duty of lacking a wife when one has been infamously outraged by one's own?

Why is a bond that has rotted indissoluble in spite of the great law adopted by the code, quidquid ligatur dissolubile est? I am allowed a separation a mensa et thoro, and I am not allowed divorce. The law can deprive me of my wife, and it leaves me a name called "sacrament"! What a contradiction! what slavery! and under what laws did we receive birth!

What is still more strange is that this law of my Church is directly contrary to the words which this Church itself believes to have been uttered by Jesus Christ: "Whosoever shall put away his wife, except it be for fornication, and shall marry another, committeth adultery" (Matt. xix. 9).

I do not examine whether the pontiffs of Rome are in the right to violate at their pleasure the law of him they regard as their master; whether when a state has need of an heir, it is permissible to repudiate her who can give it one. I do not inquire if a turbulent woman, demented, homicidal, a poisoner, should not be repudiated equally with an adulteress: I limit myself to the sad state which concerns me: God permits me to remarry, and the Bishop of Rome does not permit me.

Divorce was a practice among Catholics under all the emperors; it was also in all the dismembered states of the Roman Empire. The kings of France, those called "of the first line," almost all repudiated their wives in order to take new ones. At last came Gregory IX., enemy of the emperors and kings, who by a decree made marriage an unshakeable yoke; his decretal became the law of Europe. When the kings wanted to repudiate a wife who was an adulteress according to Jesus Christ's law, they could not succeed; it was necessary to find ridiculous pretexts....