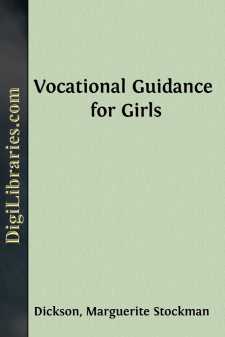 CHAPTER I Woman's Place In Society

Any scheme of education must be built upon answers to two basic questions: first, What do we desire those being educated to become? second, How shall we proceed to make them into that which we desire them to be?

In our answers to these questions, plans for education fall naturally into two great divisions. One concerns itself with ideals; the other, with methods. No matter how complex plans and theories may become, we may always reach back to these fundamental ideas: What do we want to make? How shall we make it?

Applying this principle to the education of girls, we ask, first: What ought girls to be? And with this simple question we are plunged immediately into a vortex of differing opinions.

Girls ought to be—or ought to be in the way of becoming—whatever the women of the next generation should be. So far all are doubtless agreed. We therefore find ourselves under the necessity of restating the question, making it: What ought women to be?

Probably never in the world's history has this question occupied so large a place in thought as it does to-day. In familiar discussion, in the press, in the library, on the platform, the "woman question" is an all-absorbing topic. Even the most cursory review of the literature of the subject leads to a realization of its importance. It leads also into the very heart of controversy.

Suffrage parade in Washington. Women will parade or even fight for their rights

It is safe to say that no woman, in our own country at least, escapes entirely the unrest which this controversy has brought. Even the most conservative and "old-fashioned" of women know that their daughters are living in a world already changed from the days of their own young womanhood; and few indeed fail to see that these changes are but forerunners of others yet to come. They know little, perhaps, of the right or wrong of woman's industrial position, but "woman in industry" is all about them. They perhaps have never heard of Ellen Key's arraignment of existing marriage and sex relations, but they cannot fail to see unhappy marriages in their own circle. They may care little about the suffrage question, but they can hardly avoid hearing echoes of strife over the subject of "votes for women." And however much or little women are personally conscious of the significance of these questions, the questions are nevertheless of vital import to them all.

The "uneasy woman" is undeniably with us. We may account for her presence in various ways. We may prophesy the outcome of her uneasiness as the signs seem to us to point. But in the meantime—she is here!

Naturally both radical and conservative have panaceas to suggest. The radicals would have us believe that the question of woman's status in the world requires an upheaval of society for its settlement. Says one, the "man's world" must be transformed into a human world, with no baleful insistence on the femininity of women. It is the human qualities, shared by both man and woman, which must be emphasized....