Vocal Expression A Class-book of Voice Training and Interpretation 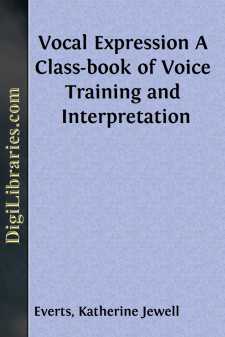 The strongest impulse of the human heart is for self-expression. The simplest form of expression is speech. Speech is the instinctive use of a natural instrument, the voice. The failure to deal justly with this simple and natural means of expression is one of the serious failures of our educational system. Whether the student is to wait on another's table or be host at his own; whether he is to sell "goods" from one side of a counter or buy them from the other; whether he is to enter one of the three great professions of law, medicine, or theology; "go on the stage" or platform; become Minister to France or President of the United States, it remains precisely true that to speak effectively will be essential to his success, and should be as essential to his own happiness as it will be to that of all involved in his pursuit of success.

Yet, if we give heed at all to the question of voice and speech, it is our last, not our first, consideration. We still look upon the mind as a storehouse instead of a clearing-house. We continue to concern ourselves with its ability to take in, not its capacity to give out. Voice and speech are still left to shift for themselves during the period of school life when they should be guarded and guided as a most essential equipment for life after school days are over. To convert the resultant hard, high-pitched, nasal tone which betrays the American voice into the adequate agent of a temperament which distinguishes the American personality, and to help English speech in this country to become an efficient medium of lucid intercourse, such is the object of this book.

In an address upon the "Question of Our Speech" delivered before a graduating class at Bryn Mawr, several years ago, Mr. Henry James said:

"No civilized body of men and women has ever left so vital an interest to run wild, to shift, as we say, all for itself, to stumble and flounder, through mere adventure and accident, in the common dust of life, to pick up a living, in fine, by the wayside and the ditch.

"The French, the Germans, the Italians, the English, perhaps, in particular, and many other people, Occidental and Oriental, I surmise, not excluding the Turks and the Chinese, have for the symbol of education, of civility, a tone-standard; we alone flourish in undisturbed and in something like sublime unconsciousness of any such possibility."

So searching an arraignment by so eminent a scholar before an audience of so high a degree of intelligence and culture seems to have been necessary to command an adequate appreciation of the condition of "Our Speech" and to incite an adequate effort toward reform. Since the arraignment was made and afterward published, classes have been organized, books written, and lectures delivered in increasing abundance, forming a veritable speech crusade—and the books and the classes and the lectures have availed much, but the real and only "reliable remedy" lies with the teacher in the public and private schools and colleges of the United States. And it is to the teacher of English and Elocution that this Class Book on Vocal Expression is offered.

Learning to Talk might have been a truer, as it had been a simpler, title, yet the more comprehensive phrase has justifiable significance, and we have chosen it in the same spirit which discards for the text-book in Rhetoric or English Composition the inviting title Learning to Write.

There is a close analogy between the evolution of vocal and the evolution of verbal expression. The method of instruction in the study of the less heeded subject of the "Spoken Word" throws an interesting light on the teaching of the more regarded question of the "Written Word." An experience as teacher of expression and English in a normal school in Minnesota has influenced the author of these pages to so large an extent in the formulation of her own method of study, and so in the plan of this volume, that it seems advisable to record it....